Yellow-shelled Semi-slugs (Parmarion martensi) are large, parasite-spreading garden pests that were accidentally introduced to Hawaii from Southeast Asia. In 1996, they were discovered on Oahu, and in 2004, they were discovered in the eastern lowland parts of the Big Island, where they are now very common. I observed this Yellow-shelled Semi-slug crawling around on a fallen wild Guava (Psidium guajava) in Pahoa, Hawaii. 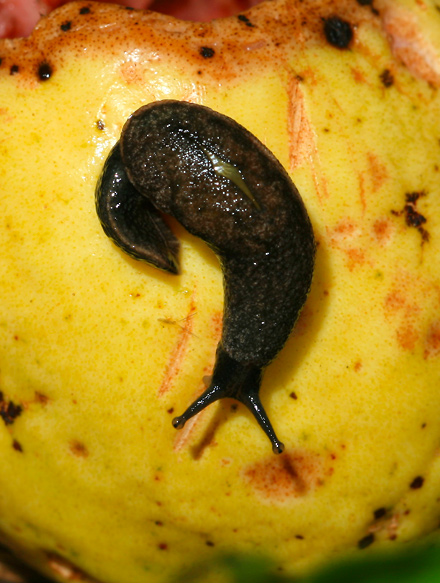 Semi-slugs are somewhere between a snail and a slug because they have an external shell like a snail, but the shell remnant is too small for them to retract up into, leaving their soft body exposed like a slug. Yellow-shelled Semi-slugs have a distinctive yellow shell on their back, but it is often kept hidden. This yellow shell is just barely visible on the above semi-slug.

Although other slugs and snails in Hawaii also carry Rat Lungworm larvae, Yellow-shelled Semi-slugs pose the greatest risk to humans given these slugs' much higher rate of Rat Lungworm infection and their adventurous habits. While exploring for food, Yellow-shelled Semi-slugs have been found climbing trees, crawling around inside houses, and even trapped inside water catchment tanks.