Some of the most annoying insects found in Hawaii are Red-black False Blister Beetles or Redblack Oedemerids (Ananca bicolor). These nocturnal beetles are highly attracted to lights, and if they are present, they can show up in large numbers to ruin your outdoor evening dining or invade your house through any small holes or gaps in the screens. My first night after moving to Hawaii, I had to remove over 30 of them from my bedroom. The pesky beetles were crawling all over my bed, walls, and ceiling. They had come in through an ill-fitting window screen. 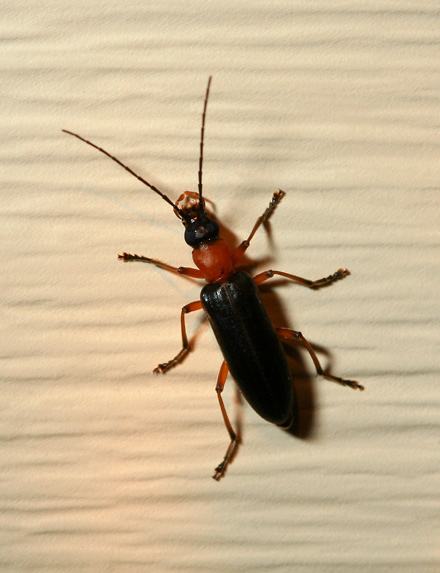 Red-black False Blister Beetles are not native to the Hawaiian Islands. They were introduced here from other Polynesian islands where they are common. These tropical beetles feed on pollen and form large mating parties on flowers, so Hawaii with its abundance of flowering plants is a paradise for them.

The red and black aposematic (warning) coloration of Red-black False Blister Beetles is a universal symbol to predators that these beetles are irritating or foul-tasting. Like true blister beetles, Red-black False Blister Beetles may contain irritating, blister-causing chemicals and so should not be handled or smashed with your hand. I've had them crawl on me and slapped them off, but I've always washed wherever they touched and so have not had any ill-effects from touching them. My dog once snapped one buzzing around his face and he immediately spat it out and began pawing at his mouth, so they must taste pretty foul. Another indication of their possible foul taste is that I've never seen any of Hawaii's abundant geckos eating these annoying beetles, although I really wish they would!