Regal Horned Lizards or Regal Horny Toads (Phrynosoma solare) are found in arid grasslands and in upland desertscrub areas in central to southeastern Arizona and northern Mexico. In May of 2008, I observed this Regal Horned Lizard in the grasslands of Arizona's Buenos Aires National Wildlife Refuge while walking my dogs. The lizard was hiding motionless in plain site alongside a trail, and it was so well-camouflaged that I nearly stepped on it. Although they are usually sharp-eyed and enthusiastic lizard chasers, my dogs never even saw it and just walked right on past. This particular Regal Horned Lizard was in the process of shedding its skin, giving it a messy, ragged, less than regal appearance. 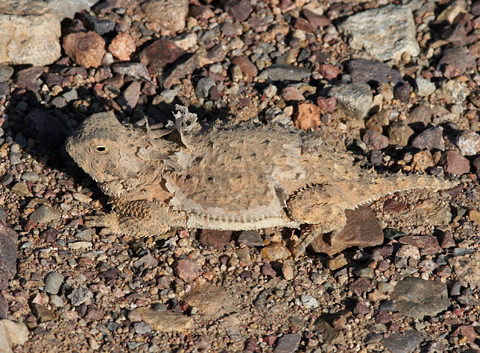 Depending on the ground color where they rest, color-changing Regal Horned Lizards are either a mottled reddish brown, ochre-brown, tan, or grayish color. These well-camouflaged lizards are broad and flattened in shape with a small, spiny tail and a crown of sharp, hornlike scales along the sides and back of the neck.

There are six different species of Horned Lizard (Phrynosoma spp.) found here in Arizona, and although they look similar to the others, Regal Horned Lizards can be identified by both the single fringe of enlarged, point-tipped scales along their sides and by the distinctive characteristics of their neck "horns". Their four central neck horns are large and of a similar size, and the central two neck horns come together and touch at the base. 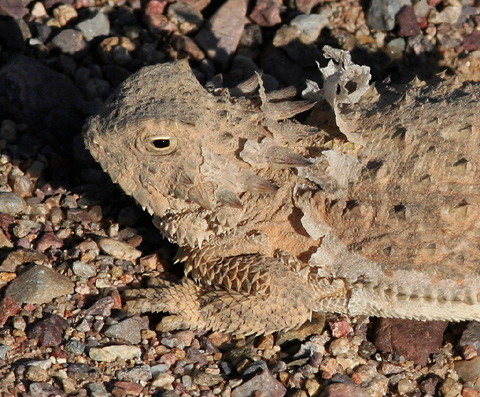 Regal Horned Lizards not only use camouflage and their impressive neck horns to protect themselves from predation, they will also puff themselves up menacingly or squirt blood from their eyes to alarm and repel predators.

Regal Horned Lizards are active year-round on warm, sunny days, and they feed mainly on terrestrial insects like ants. The best place to find one of these lizards is near an active ant colony in an open, sunny area. Any ants that venture too close or any soldier ants that come up to bother it will be gobbled up by the waiting Regal Horned Lizard.