Cliff Chipmunks (Tamias dorsalis) are found on cliffs, boulders, and rocky outcroppings in pinyon-juniper woodlands and upland areas from the Great Basin in the western United States down through parts of Mexico. Cliff Chipmunks are very common along the south rim of Arizona's Grand Canyon, which is not surprising given this scenic location's abundance of dramatic cliffside habitat and pinyon-juniper woodlands. This particular Cliff Chipmunk was one of the many there at the edge of the Grand Canyon, and it was happily licking up a splatter of food dropped by a careless tourist. 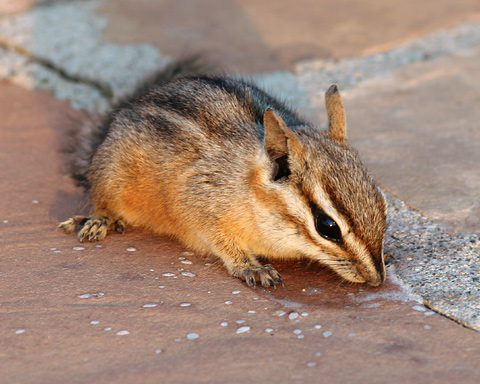 Cliff Chipmunks are gray above and creamy white below with a wash of yellowish rust on their sides. They have large, dark eyes, a boldly striped face with a lighter brown stripe under the eye, a patch of white behind the ear, a long, thin, bushy tail colored rust below, and five, often indistinct dark stripes on their back. The central dorsal stripe is the darkest, and it and the other, fainter dark stripes are separated by bands of light gray. 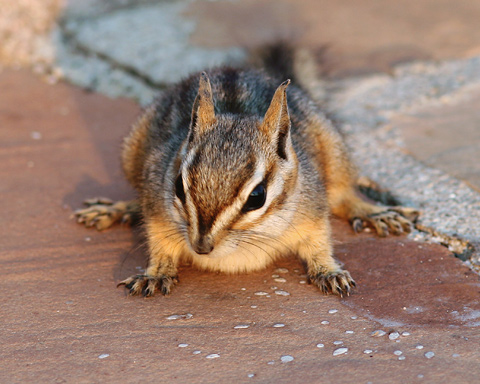 Three other similar-looking chipmunks are also found in Grand Canyon National Park, the Colorado Chipmunk (T. quadrivittatus), the Least Chipmunk (T. minimus), and the Uinta Chipmunk (T. umbrinus), but all of these other chipmunks have much bolder, more distinct black-brown and white striping on their back.

Although Cliff Chipmunks like this one do scavenge for spilled tourist food at the Grand Canyon, their normal diet consists mainly of seeds and fruits, which they carry in their cheek pouches back to store in their burrows amongst the rocks and cliffs.