Pronghorns (Antilocapra americana) are native to the sagebrush plains, grasslands, and deserts of western North America. Although Pronghorns look similar to antelopes, goats, and deer, they are actually none of these and are instead the last surviving member of their own family, Antilocapridae (Pronghorns).

The Pronghorn is the fastest land mammal in North America, with top speeds variously reported to be from to 45 to 60 mph (72 to 97 km/h). Pronghorns are named after their pronged (single-branched) horns. Both sexes have curved horns with a single prong, but those of the adult males are noticeably larger. Pronghorns are tan brown above and white below with bands of white across the front of the neck and a conspicuous white rump that makes them very easy to spot. Besides their larger horns, the males also have a line of brownish black under the jaw and dark brown between the eyes and down to the top of the nose.

Three different subspecies of Pronghorn are found here in Arizona. The endangered Sonoran Pronghorn (A. americana sonoriensis) is found in the Sonoran Desert of southwestern Arizona. The Chihuahuan Pronghorn (A. americana mexicana) is found in southeastern Arizona. It was reintroduced to this area from Texas and can now be observed in places like the Buenos Aires National Wildlife Refuge and the Las Cienegas National Conservation Area. 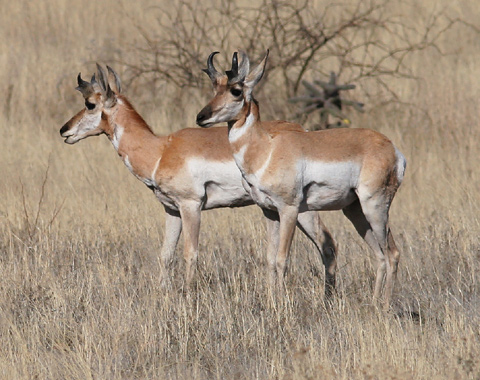 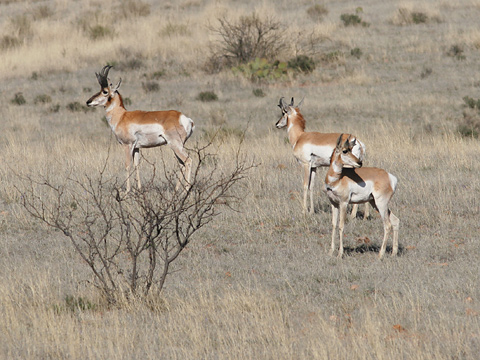 American Pronghorns (A. americana americana) are found in the northern half of Arizona, and they are darker in color and have a broader head than the Chihuahuan Pronghorns. In March of 2008 on my way to the Grand Canyon, I observed these American Pronghorns below on the outskirts of the town of Valle, Arizona. 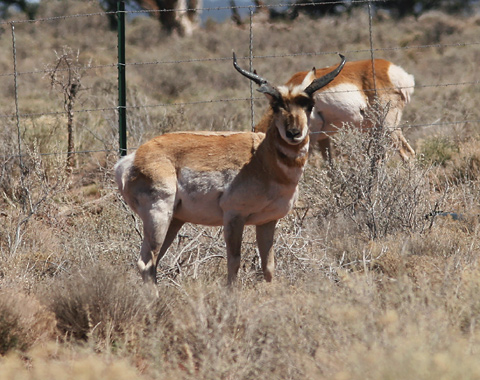 The American Pronghorns were both on the inside and outside of a fenced area, so some of them had obviously crawled under the fence. 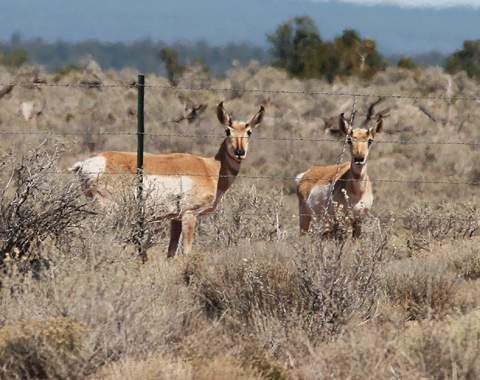 Unlike deer, Pronghorns are not fence jumpers, so livestock fences can be harmful, impenetrable barriers to them, keeping the Pronghorns from food and water unless these fences are properly constructed to allow the Pronghorns to safely crawl under them. Sadly, the widespread fencing of the American west has contributed to the decline in the numbers of these native North American animals.