Western Bluebirds (Sialia mexicana) are found in western North America, and these colorful birds are year-round residents throughout much of the northern half of Arizona and mostly winter visitors in the southeastern and northwestern parts of the state. In southeastern Arizona, Western Bluebirds are uncommon summer residents in open pine forests in the mountains and common winter visitors in oak-pine savannas and in grassy lowland areas like golf courses.

Western Bluebirds are much more common in northern Arizona, and they were one of the most common birds I saw during my trip to Flagstaff and Grand Canyon, Arizona in March of 2008. This male Western Bluebird below was in a grassy, wooded area at the south rim of the Grand Canyon. 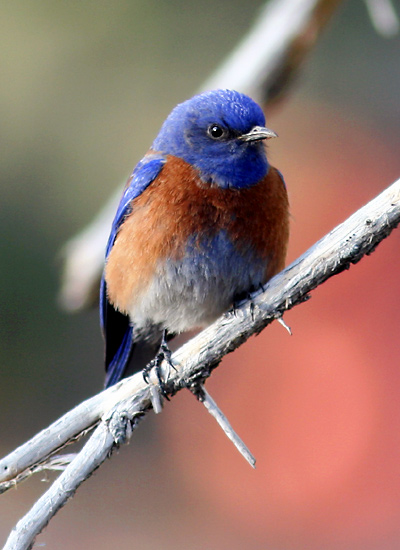 Male Western Bluebirds are a deep purple-tinged blue above with a matching blue throat and often some chestnut on the upper back and shoulders. They are pale grayish below with a bright chestnut breast, sides, and flanks. Female Western Bluebirds are much paler and duller and are brownish gray above and whitish gray below with blue on the wings and tail and a wash of pale rust on the breast and sides. 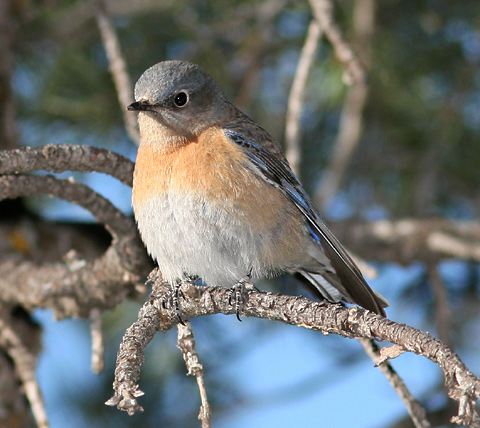 Western Bluebirds nest in tree cavities or bluebird houses in open, grassy woodlands, forest meadows, or in grasslands and pastures with adjacent trees or hedgerows and scattered fence posts or taller plant stalks for perching on. Western Bluebirds feed mainly on insects during the warmer part of the year, and they can often be seen swooping to the ground from a low perch to capture insects in the grass. During the winter when insects are scarce, Western Bluebirds will also feed on berries. 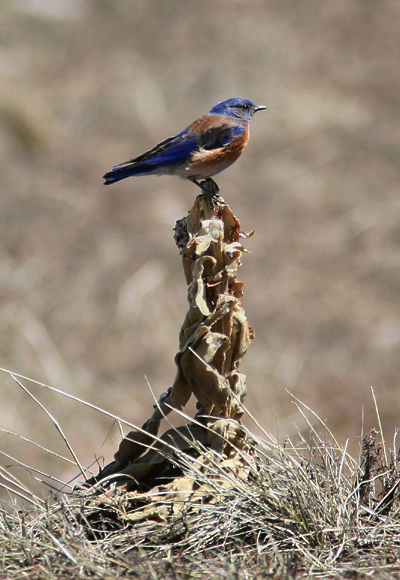 Since Western Bluebirds are cavity nesters like similarly-sized and much more aggressive non-native species like House Sparrows (Passer domesticus) and European Starlings (Sturnus vulgaris), Western Bluebirds are often out-competed for nesting sites, and because of this, their numbers are declining here in Arizona. Since the lack of available nesting cavities is a real problem for Western Bluebirds, putting up bluebird nest boxes in areas of suitable habitat can help increase their population numbers. Bluebird houses can be made or purchased, and the North American Bluebird Society has a great deal of helpful information on where to position your bluebird houses and how to care for them.

Unfortunately, Western Bluebirds are a bit particular about their nesting habitat and will not nest in dense woodlands, in urban and most suburban areas unless they are directly adjacent to open, grassy areas, and in areas like Tucson, Arizona where they are only winter residents.