Yellow Warblers (Dendroica petechia) can be found throughout most of the Americas, from Alaska down to the northern half of South America. Here in southeastern Arizona, Yellow Warblers are common summer residents in riparian woodlands with tall trees. They begin breeding here in April after the trees have leafed out and insects are plentiful.

In early April of 2008, we observed three Yellow Warblers, a female and two males flying frantically back and forth through the treetops along Cienega Creek in Arizona's Las Cienegas National Conservation Area. The female was being hotly pursued by an amorous trespassing male Yellow Warbler, and her furious mate was chasing after and attacking the trespasser. 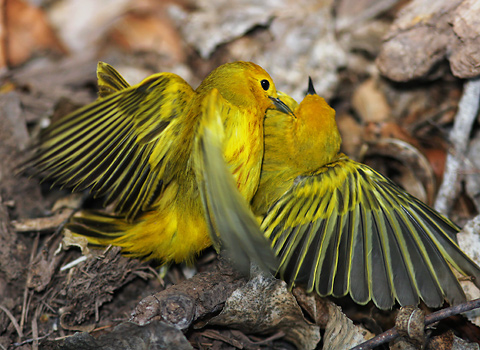 The brightly colored males were fighting with each other quite savagely, and both combatants rolled around on the ground furiously biting, kicking, and body slamming each other. One of the enraged males even tried to take out the other one's eyes using both his beak and claws. 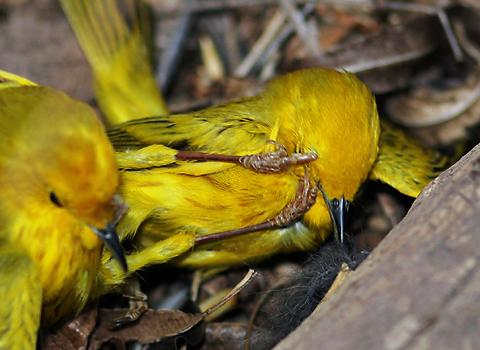 Yellow Warblers are usually seen peaceably moving through the treetops as they search for insects among the leaves, all the while singing their lovely "Sweet, sweet, sweet, I'm so sweet." songs, so we were quite surprised to see them savagely fighting each other on the ground. The male Yellow Warblers were so obsessed with fighting that they seemed to be oblivious to our nearby presence, allowing us to get a good close-up view of these beautiful, but surprisingly aggressive little birds.