White-faced Capuchin (Cebus capucinus) monkeys are common in the low to middle elevation primary and secondary forests of Costa Rica, where troops of these active monkeys can be seen foraging and moving nimbly through the mid-canopy of the forest. White-faced Capuchins are the only species of Capuchin monkey (Cebus sp.) found in Central America, and they range from Honduras southward through Central America to Colombia and Ecuador in South America. In May of 2007, I observed a large troop of White-faced Capuchins in Manuel Antonio National Park, Costa Rica. 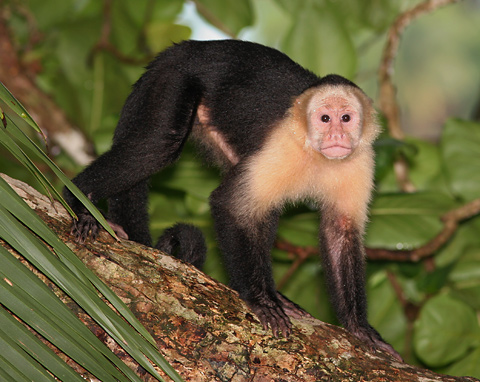 The large troop of White-faced Capuchins were traveling from place to place throughout Manuel Antonio National Park, and we encountered what we believed to be the same troop of monkeys several times as we walked this small, coastal park's roads and trails. 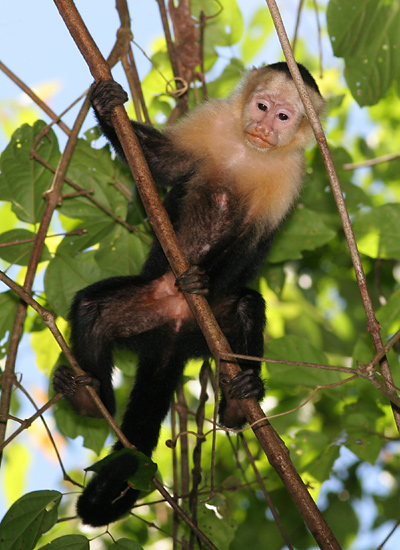 While in Manuel Antonio National Park, we observed a troop of White-faced Capuchins leaping across a large gap in the forest canopy directly over the heads of some delighted tourists standing in the road below. One after another, the monkeys leapt with acrobatic ease across the large gap, and eventually all but one of them crossed this way. Even though even smaller monkeys had easily made it across, the last monkey, a young one, kept chickening out at the last moment. Fearful of not only the jump but also of being left behind, the frantic monkey kept repeatedly racing along the overhanging branch toward the jumping off point and then changing its mind and stopping just before jumping. The amused tourists watching below began rhythmically chanting "Jump! Jump! Jump!" like a stereotypical mob watching a potential suicide jumper. As the other members of its troop disappeared into the forest canopy, the frightened little monkey finally summoned enough courage to make the jump, which it did with absolute ease despite its fears. 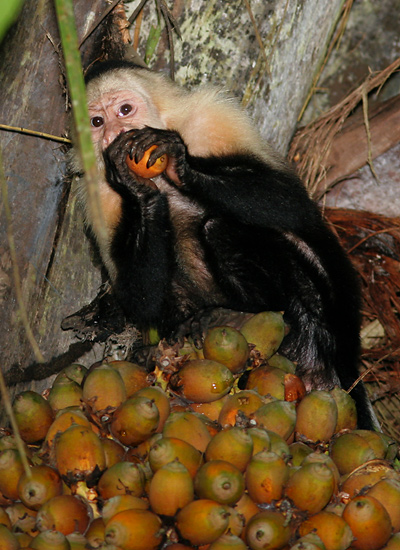 In some areas with humans, the omnivorous and intelligent White-faced Capuchins have learned to aggressively beg for and brazenly steal food from them. White-faced Capuchins are the main reason for all of the "Do not feed the monkeys!" signs in the tourist areas of Costa Rica. The other monkey species in Costa Rica are not quite so bold and prone to misbehaving.

We got to observe some of this naughty White-faced Capuchin behavior near a seaside picnic area in Manuel Antonio National Park. A couple of the tourists had left some of their belongings unattended on the beach as they swam, and one of the White-faced Capuchins quickly seized the opportunity to do a little stealing. The thieving monkey rifled through a tourist's bag and snatched her bottle of coconut suntan lotion. The triumphant monkey then raced back up into the trees to eat its delicious smelling treat. When the poor monkey discovered that its stolen suntan lotion smelled good but tasted foul, it threw a yelling, stamping, arm flailing temper tantrum like a naughty child and angrily flung the bottle of suntan lotion at the tourists below, fortunately missing everyone. 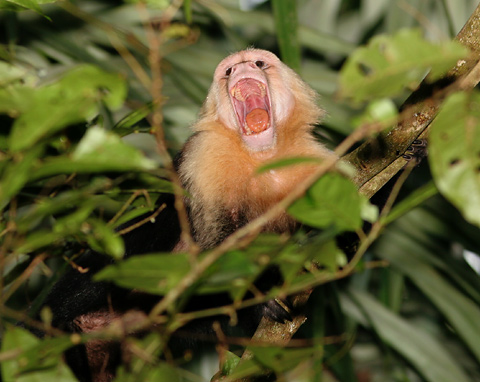 Along with blunt molars for chewing fruits and nuts, White-faced Capuchins also have large, sharp canine teeth, and they have been known to bite people if handled or if annoyed while receiving food handouts. Feeding these usually charming and entertaining wild monkeys just makes them aggressive and bold around humans and thus more likely to bite, which one reason that it is prohibited.