Hourglass Treefrogs (Hyla ebraccata) are common, nocturnal, arboreal frogs found in lowland tropical rainforests throughout much of Central America. This boldly patterned Hourglass Treefrog was perched on a leaf outside of a restaurant in Manuel Antonio, Costa Rica early one heavily overcast morning. 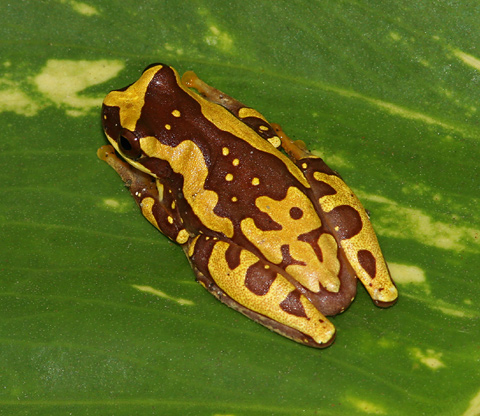 Hourglass Treefrogs breed mainly during the rainy season when temporary rain pools are common, and the males can be heard calling to attract females at this time. Hourglass Treefrogs have a somewhat unusual method of reproduction. Female Hourglass Treefrogs lay their jelly-like masses of eggs on horizontal leaves overhanging pools of water. The females do this to protect their eggs from aquatic predators. When the eggs hatch, the tadpoles slither down the leaves and drop off into the water, where they can then develop into frogs like regular tadpoles.