In Costa Rica, Violet Sabrewing (Campylopterus hemileucurus) hummingbirds are found in the mountains of both the Pacific and Caribbean slope at elevations from 5000 to 8000 feet (1524 to 2438 m) in areas of second growth forest and at forest openings and edges where they can best find their food source, nectar-filled flowers. Violet Sabrewings range from southern Mexico to western Panama. I observed this male Violet Sabrewing at about 7000 feet (2134 m) in elevation in San Gerardo de Dota, Costa Rica in May of 2007. 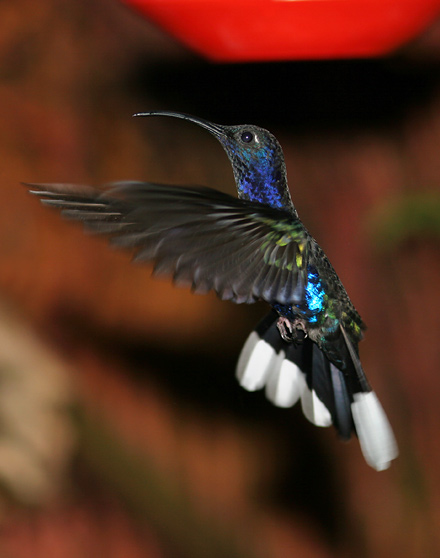 At 6 inches (15 cm) in length, male Violet Sabrewings are quite large for a hummingbird, and they are mostly an iridescent violet color with some iridescent green on the wings and back. The females are green above, grayish below, and have a small, violet gorget. Both sexes have a long, black, decurved bill and a long, black tail with the corners edged in white.

The weather was very wet and dreary while we were in San Gerardo de Dota, which shouldn't have been much of a surprise given that we were in the often cloudy and misty cloud forest during the Costa Rican rainy season, so I unfortunately wasn't able to get a photograph of this glorious hummingbird in the sunlight. 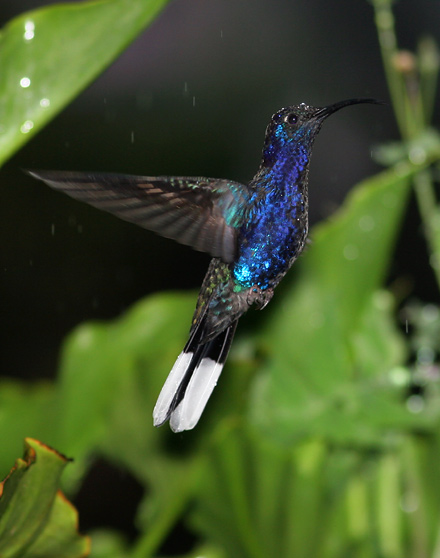 Because the rain was so persistent, the hungry hummingbirds were out visiting the flowers and hummingbird feeders despite the rain. The male Violet Sabrewing above was one of those out defiantly flying through the rain, and he even had a small raindrop perched on his head.