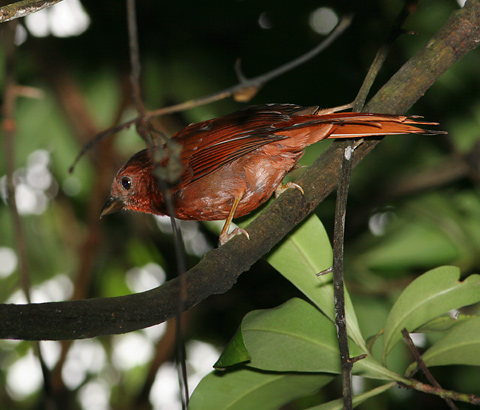 Male Red-crowned Ant Tanagers have dark eyes, a blackish bill, and are a dull brownish red color. The males have a not always visible crown patch of bright red, which they will erect when excited. 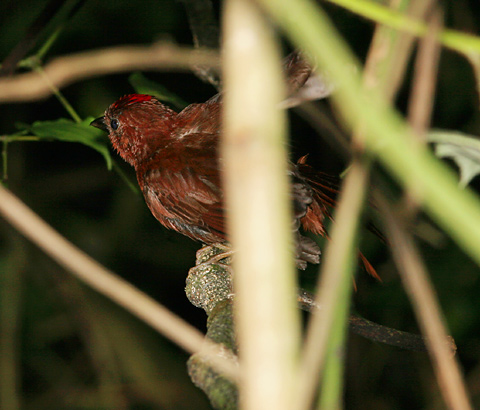 Male Red-throated Ant-Tanagers (Habia fuscicauda) are very similar in appearance and also have a bright red crown patch, but these birds are only found along the Caribbean slope and have an overall duller coloration with a brighter, more contrasting red throat.

Like the males, female Red-crowned Ant Tanagers have dark eyes and a blackish bill, but they are a dull yellowish olive-green color. The immature males look like the females but have varying amounts of red.

Although I observed the other family members foraging in the shadowy tangle of vines and small trees over my head, the male Red-crowned Ant Tanager was the only one to be photographed because he was the only family member that would approach me. In fact, he seemed quite fascinated by me and would follow along foraging beside me in the understory every time I walked along the forest path. It was just me in particular that the Red-crowned Ant Tanager was interested in, and he ignored my father whenever he accompanied me. Red-crowned Ant Tanagers have been observed occasionally following columns of Army Ants (Subfamily Ecitoninae) and roving bands of Coatis (Nasua spp.) in order to feed on the insects they disturb, but I've never heard of them following humans before. 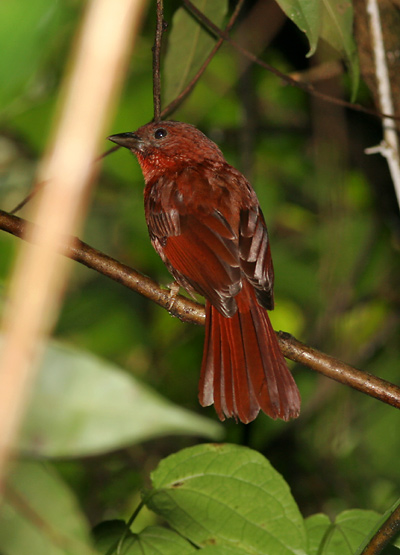 Red-crowned Ant Tanagers are very difficult to photograph because they are in constant motion and frequent the dark, shady, often tangled forest understory where lighting and views are poor. This male Red-crowned Ant Tanager kept teasing me by flying up and perching out in the open right in front of me whenever I didn't have my camera. Bright-eyed, he would erect his little red crest and strike various model bird poses for me as I stood there frustrated, camera-less, and holding only my binoculars. As soon as the camera appeared, he would retreat again to the tangled forest understory.

As if following me and teasing me were not enough, this little red devil also buzzed me. He flew straight toward my head, I screamed and he barely missed me at the last second, just brushing against the top of my head. I don't know if he was being aggressive, having a bit of daring fun, or was trying to catch one of the annoying insects that had been buzzing around my head. This male Red-crowned Ant Tanager was traveling with a female and several immatures, so I don't know if he would have had a second nest to aggressively protect. Also, when he captured a fat, green caterpillar, he ate it right there instead of carrying it off to nestlings somewhere. 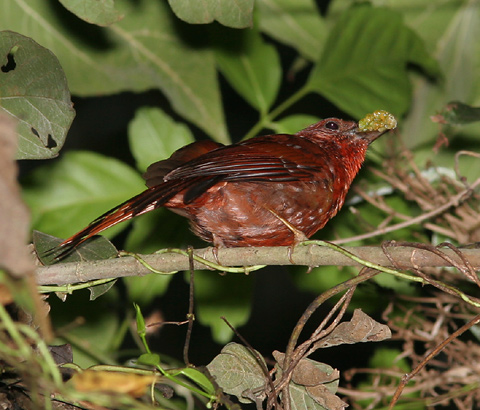 Even though this male Red-crowned Ant Tanager was not the most beautiful or spectacular bird that I saw in Costa Rica, he was probably my favorite because I much prefer character to beauty any day, especially when it's a mischievous character like this little red devil.