Great Plains Toads (Bufo cognatus) are found throughout much of Arizona, especially in grassland areas. Here in Tucson, these toads are found in our surrounding desertscrub. I observed this little Great Plains Toad in a desert area in Tucson's Agua Caliente Park in September of 2006. 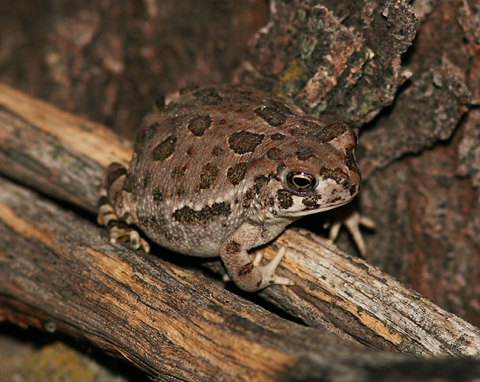 Great Plains Toads are brown, gray, or olive-green and can be recognized by the large, dark, symmetrical (mirrored on each side) blotches on their backs. These dorsal blotches have thin, light-colored borders.

Although these toads can reach up to 4.5 inches (11.4 cm) long, this little Great Plains Toad was less than half that, so it may have been a young one. Even though it was small, it was actually quite fat. Its skin was stretched smooth over its plump little body, and it didn't seem to be able to hop. After its first few flop hops went nowhere, it tried to waddle away from me, but when that quickly proved to be too much of an effort, it decided to remain still and try to camouflage itself near a tree trunk. This finally allowed me to get a photo of something other than its rear end.

Great Plains Toads spend most of the year here in underground burrows, but they will emerge during the summer monsoon rains to breed and feed on insects and other invertebrates. In the evening, the males will gather in pools of rainwater and call to attract females. These calls are loud, long, metallic trills.