Here in southern Arizona, Spotted Towhees (Pipilo maculatus) can be found in brushy areas in oak or pine woodlands in the mountains and in dense riparian or chaparral brush at somewhat lower elevations during the winter. 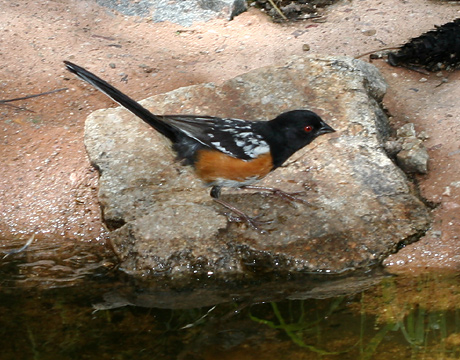 A Spotted Towhee can be recognized by its black hood, rufous sides, red eyes, and white-spotted black wings and back.

These secretive yet oddly tame birds will sometimes come out into the open, but I usually see (and hear) them scratching around in the leaf litter and skulking around in dense thickets. Spotted Towhees are almost always seen on or near the ground, which is where they both feed and nest.

Along with the Eastern Towhee (Pipilo erythrophthalmus), the Spotted Towhee used to be classified as a form of the Rufous-sided Towhee, but they have now been separated into two separate species, even though they do hybridize where their ranges meet on the Great Plains.