Many Longhorn Beetles (Family Cerambycidae), so named for their unusually long antennae, have wood-boring larvae that are serious pests of trees, but some Longhorn Beetle larvae feed on other plants as well, especially in areas where trees are less abundant.

Here in the Sonoran Desert, the larvae of Paloverde Root Borers (Derobrachus geminatus) feed on our desert trees, while the larvae of Cactus Longhorn Beetles (Moneilema gigas) bore into and feed on our desert cacti, mainly Pricklypears (Opuntia spp.) and Cholla (Cylindropuntia spp.). While they don't bore into them, the adult Cactus Longhorn Beetles will also feed on cacti and will happily eat any seedling Saguaros (Carnegiea gigantea) they find. 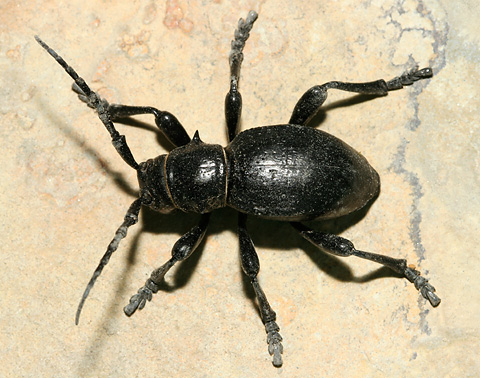 This rather dusty Cactus Longhorn Beetle wandered into my yard ahead of a summer monsoon thunderstorm. I usually see these beetles during the summer monsoons here in Tucson, but they are thankfully not that common in my yard.

We have quite a few large, black beetles here, and the best way to distinguish Cactus Longhorn Beetles from all of the rest is by their distinctive profile. 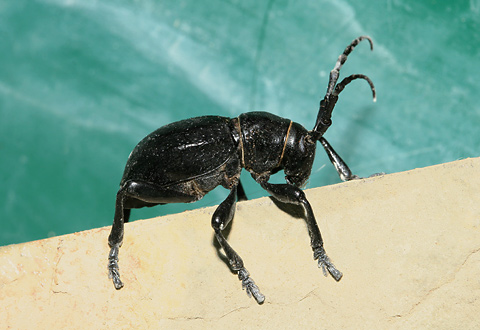 Cactus Longhorn Beetles have an arched back and an elongated head rather like that of a horse. They are normally a shiny black color, but this messy-looking one was speckled with dust and had dirty feet. If I hadn't captured it and brought it inside for my photographs, it would have been washed a clean and shiny black again by the monsoon thunderstorm.