After a tip from a reader about some night-blooming Huachuca Mountain Rocktrumpets (Macrosiphonia brachysiphon) in a wash near Colossal Cave, my dad, my cousin visiting from Colorado, and I went out looking for them one evening over Labor Day weekend in 2006. I had never seen these plants before and was quite eager to photograph them.

Using a map and photo from the helpful reader, GPS, and several high-powered flashlights, we managed to find the Huachuca Mountain Rocktrumpets in the dark, but unfortunately none of them were still blooming. I did see this rather spooky-looking moth with gleaming coppery eyes perched on some of the developing seed pods though. 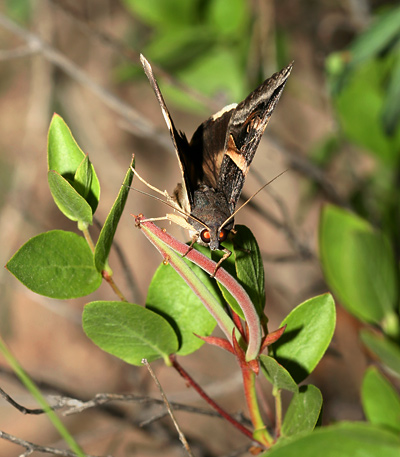 Oh well, now that I know where these plants are, I will return next year to get some photos of the flowers.

Update: I finally found these flowers blooming one heavily overcast morning in late August of 2007. Nocturnal flowers like these will sometimes remain open for a while in the morning on dark, cloudy days.