I observed this large, female Orb-weaver Spider (Family Araneidae) with a captured June Beetle in the desert during a nighttime wildflower hunt near Colossal Cave. 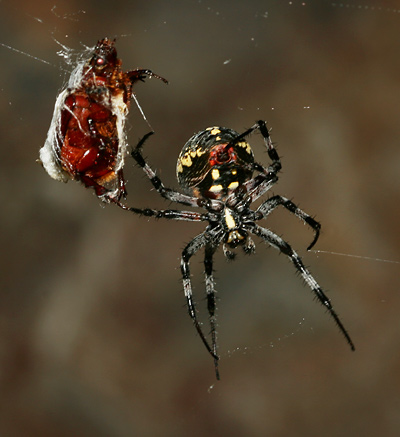 There are quite a few species of Orb-weaver Spider (Araneidae) in Arizona, but I don't often see them here in the desert during the dry times of the year. They can be abundant in grassy and riparian areas in years with abundant summer rains. Orb-weaver Spiders are known for the classic, radiating spiral shape of their webs. Many of these conspicuous spiders are quite colorful or boldly patterned and are easy to see because they will often perch in their webs.

Orb-weaver Spiders have been known to build their webs directly across paths and trails, and although there is a chance of accidentally walking into one of these spiders, they are not considered to be dangerously venomous.

This Orb-weaver Spider's web was between two trees where I was walking, but luckily I had shown my flashlight up from looking for snakes on the ground and spotted this large, boldly patterned, and therefore easy to see spider before walking into her.

Update: A couple of kind readers let me know that this spider is most likely a Western Spotted Orbweaver (Neoscona oaxacensis).