Mexican Jays (Aphelocoma ultramarina) are a predominantly Mexican species that can also be found in oak woodlands in southeastern Arizona, southwestern New Mexico, and in a small part of southwestern Texas. 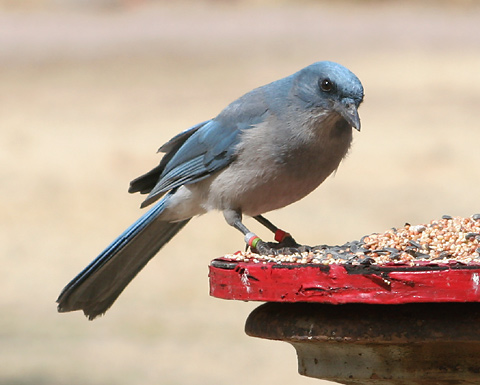 I observed these Mexican Jays at the Southwestern Research Station in the Chiricahua Mountains of Arizona. Mexican Jays live in large social groups with several breeding pairs. The unpaired members of the group will generally help the breeding pairs by feeding the young, sounding the alarm for approaching danger, and mobbing any predators.

Mexican Jay social behavior has been studied for decades at the Southwestern Research Station, and all of the Mexican Jays in their study group have been banded with various color combinations to identify them. 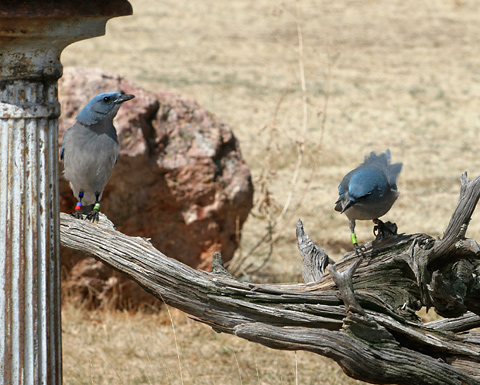 Mexican Jays are blue above and pale gray below. Mature adults have black bills, while the younger adults, like the one with a mouthful of seeds below, have lighter colored patches on the lower half of the bill for the first few years or so. 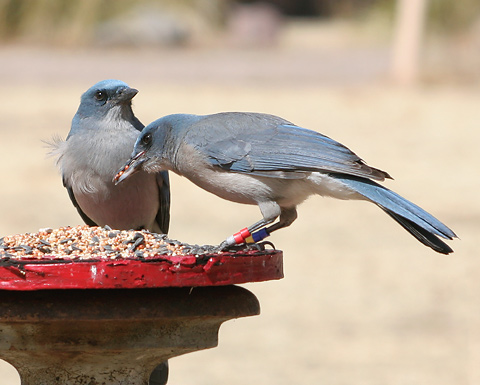 Mexican Jays can be distinguished from other similar jays by their plain, gray chests. The similar Western Scrub-Jay (Aphelocoma californica) has a gray back, a white line over the eyes, and a blue "necklace" on its chest. A Pinyon Jay (Gymnorhinus cyanocephalus) has a blue chest.

Closer to Tucson, Mexican Jays can also be seen in Madera Canyon, where they are quite common. Jays are generally mountain birds here, and they are not very common in the city of Tucson. The only jays I have seen in my yard were a few wintering Western Scrub-Jays.