In southeastern Arizona,Rock Wrens (Salpinctes obsoletus) are common, year-round residents on rocky slopes, cliff areas, and in steep-sided canyons. Rock Wrens can be found on rocky hillsides throughout western North America from desert to alpine habitats. Rock Wrens are fairly common in our local canyons and foothills here in Tucson, but they are not always easy to spot because their dull gray-brown coloration blends very well with the desert dirt and rocks. They are best located by voice because like many other wrens, Rock Wrens sing quite loudly.

In March of 2006, this Rock Wren ran out from under my car as I returned from a hike. The snoopy little Rock Wren was busily hunting for insects in the parking lot and exploring around under all of the parked cars. 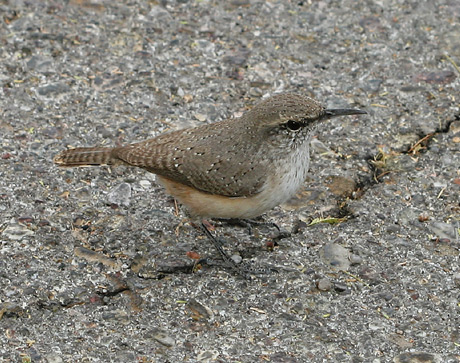 I have never seen a Rock Wren foraging on the pavement like this before, but these active birds are no strangers to paving, as they will build a pavement of small stones leading into their nesting cavities in the rocks.

Rock Wrens are brownish gray above with a cinnamon rump and white, shading to buff below. The sexes look identical. Adult Rock Wrens can be distinguished from other small, brown wrens by the tiny white and black spots on their backs. Canyon Wrens (Catherpes mexicanus) also have these spots, but their undersides are a dark red-brown, while those of Rock Wrens are quite pale and only lightly tinged red-brown. 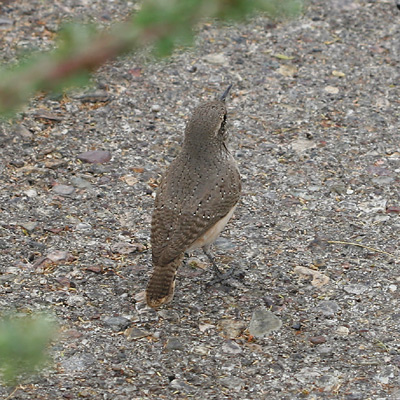 Another bird is also commonly known as the Rock Wren, but this Rock Wren (Xenicus gilviventris) is only found in New Zealand, and it is more colorful and much less common than our North American species.