For the past couple of days, I've been seeing old and new military aircraft, often in odd-looking formations of WWII and modern aircraft, flying over my house. I don't live too far away from Davis-Monthan Air Force Base, and this weekend they were having their annual Heritage Flight Conference. The free air show from my house has been fun to see, but it can be seen much better near the Pima Air and Space Museum. While in my backyard, I did manage to capture one of the aircraft with my camera, an F-4 Phantom II with its distinctive anhedral tail. 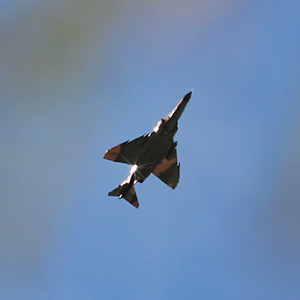 It had been painted in brown and green camouflage, which is obviously meant to hide it on the ground and not in the sky. The F-4 Phantom II was retired in 1996 from the U.S. military, but it can still be found in use in other countries.