Normally, I would begin photographing early spring wildflowers here in Tucson during February, but this year with our lack of winter rains, the usual spring wildflowers are missing, never even sprouted. To amuse myself when I'm out exploring around in the sadly dry and brown desert, I've been photographing other interesting things like these dead cacti, victims not of our drought, but of other varied misfortunes.

This dead Saguaro (Carnegiea gigantea), with bits of its dry flesh still hanging on, looked like even more the ragged, wretched ruin when compared to its neat green neighbor. 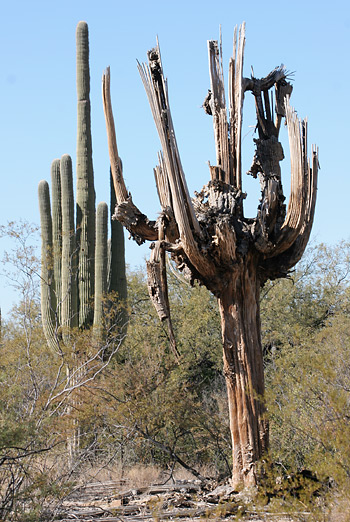 This next Saguaro, still showing a bit of green, suffered a fall and broke into several pieces. A ring of woody ribs can just be seen in the Saguaro's cross section. 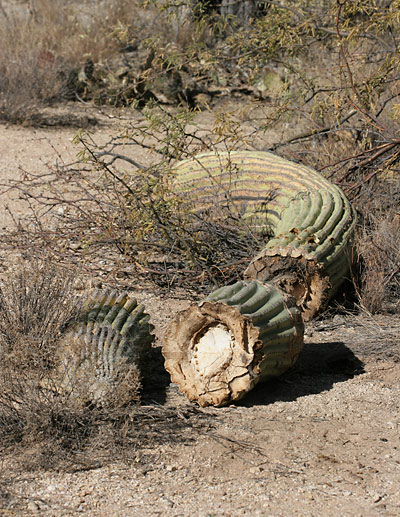 The dead cholla (Opuntia sp.) below still had most of its skin intact, but a drooping strip of dry skin on one of its arms revealed the skeleton beneath and glowed like burning embers when backlit by the winter sunlight. 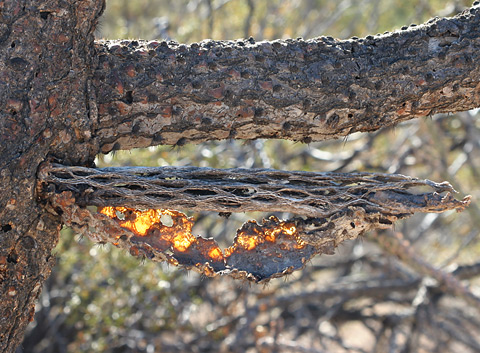 Finally, this dead Candy Barrelcactus (Ferocactus wislizeni) had suffered the eventual fate of many of its kind, it had grown too tall for its roots to support and had fallen over. 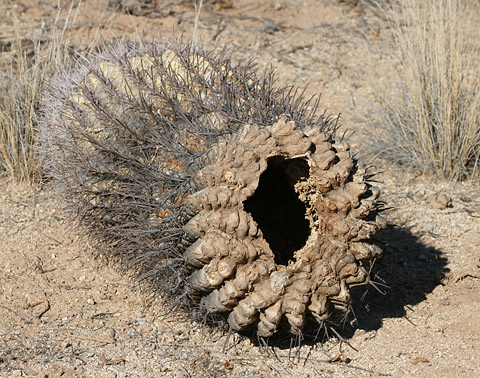 The roots were completely torn off, and the dead, dry cactus was hollow inside. I didn't see any animals hiding inside the dead cactus, but it looked like rodents had been there nibbling on things, and it was full of Black Widow spider webs.

Photographs of dead cacti are a bit depressing, but they express how I feel about this dry, brown spring. Luckily, Tucson has both a winter and a summer rainy season, so there's still hope for summer wildflowers this year.