Late one October afternoon, I found this fuzzy bee (or bee mimic?) sleeping in an Apache Plume (Fallugia paradoxa) flower. 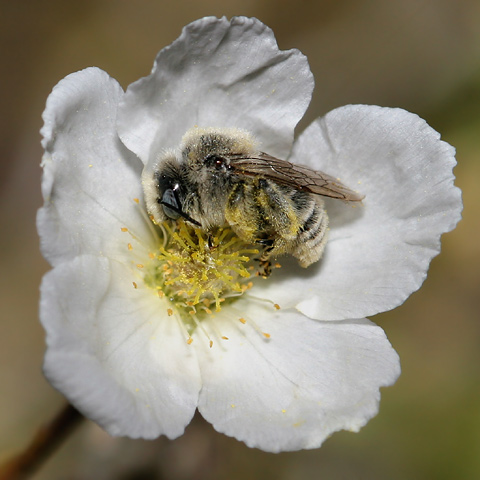 When I first saw this bee laying motionless on its side, I wasn't sure if it was dead or just sleeping, as I have seen solitary desert bees sleeping in flowers before. I took this photo and wandered off to take some more wildflower photos. When I came back, the bee was still there. I just had to know if it was alive or not, so I bumped the flower. The little fuzzy bee woke up and flew off to another Apache Plume flower, where I left the sleepy bee undisturbed this time.

This is not a Honeybee (Apis mellifera), but other than that I don't know what species it is. It is very fuzzy and has reflective eyes like mirrors. My best guess is that it is a native species of solitary bee or a bee mimic.