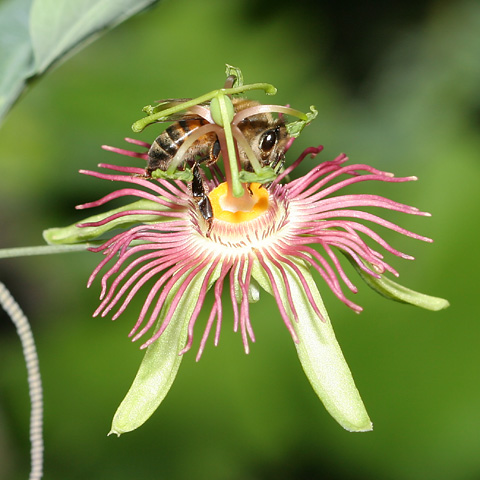 Africanized Honeybees are far more mobile than European Honeybees, and they have adapted to follow irregular or isolated flower sources in areas with extended or year-round blooming seasons. These bees also favor night-blooming, bat-pollinated flowers like those of our Saguaro cacti which remain open for a period in the morning. European Honeybees are less mobile because they are more adapted for a temperate climate with more regular pollen and nectar sources and the need to stock up on honey for the cold winters.

Neither European Honeybees nor Africanized Honeybees are native to the US, and while Honeybees are absolutely essential for pollinating cultivated plants and crops, they unfortunately outcompete native bees and other pollinators at native plants.

Recently, I started having a problem with bees at a leaky hummingbird feeder in my yard. These particular bees suddenly became unusually bold and aggressive, and whenever I or my dogs went outside, these bees would come up and deliberately head-butt or bump into us, a characteristic hive-protection behavior of Africanized Honeybees. 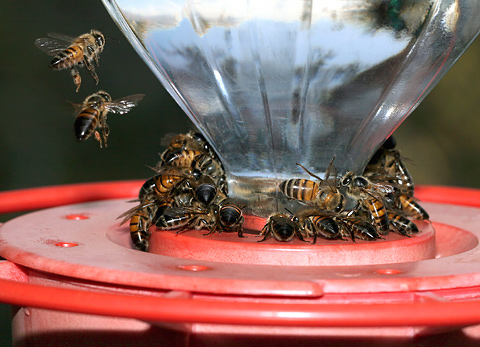 Bumping bees don't initially sting, instead they are warning potential threats to stay away from their hives. Bumping guard bees are a clear warning of a potential bee attack, and here in Africanized Honeybee territory, it's best to leave the area if bumping bees or a visible wild beehive are ever encountered.

I couldn't find any nearby hives, so I don't know why the bees were doing this. It is really creepy to feel bees continuously bumping against you as you walk around outside, especially knowing that the chances are excellent that they are Africanized. These bees were also fond of landing on us, but they didn't sting either me or my dogs. I kept my dogs inside for the day until I could take down the hummingbird feeder at night when the bees were sleeping. After a day or so, the bumping stopped and the aggressive bees dispersed.