The Sonoran Desert has a wide variety of diverse species, but away from wetland areas, the desert is not exactly crawling with gastropods, so I was a bit surprised to find this empty snail shell in the desert, miles away from any water or human habitation. 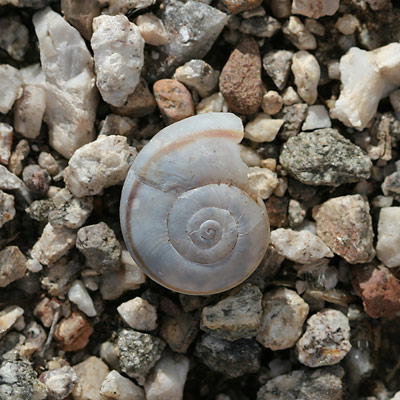 If there are any terrestrial snails that live in arid Sonoran Desert scrub, I have never seen them. I have no idea where this former snail might have originated, but I found the shell on a rocky hillside under a Saguaro. I wonder if it might have been dropped by a bird either living in the Saguaro or with a nest among its arms.

Update from AÖrstan at Snail's Tales:

I am not familiar with the snails of Arizona, but what you found was probably a Sonorella species. This is what Bequaert & Miller (Mollusks of the Arid Southwest, 1973) said: “Even the arid Tucson Mts and their loosely connected nearby hills have three species, all widespread (S. magdalenensis, S. sabinoensis, and S. baboquivariensis).”