The most famous feature of Arizona is the Grand Canyon located in the northwestern part of the state. This huge, spectacular canyon is a popular tourist destination, but it can also be easily seen from the air, and it is so large that it can even be seen from space. 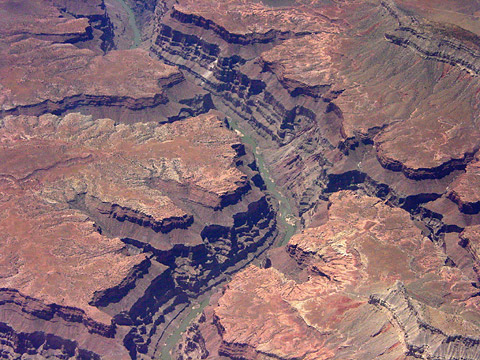 This photo was taken out of the window of a commercial jet, and the Colorado River can be seen as a thin, green ribbon in the bottom of the Grand Canyon. The Colorado River runs through this scenic canyon and along the western edge of Arizona. Because the Colorado River is such a major water source for the surrounding states and so much of its water is removed, this river often dries up well before it ever reaches its mouth at the Gulf of California (Sea of Cortez).