Some of the most colorful fall foliage in the mountains around Tucson can be found on Western Poison Ivy (Toxicodendron rydbergii). 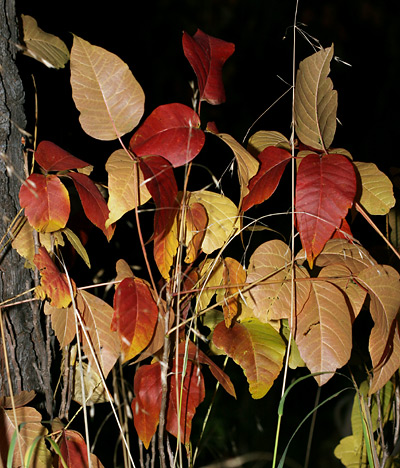 The autumn leaves of Western Poison Ivy come in a variety of colors, even on one plant, and they can be red, orange, yellow, or even a pale tan color which is a bit strange to see on non-dead leaves.

Western Poison Ivy used to be considered a variety of Eastern Poison Ivy (Toxicodendron radicans), but now it is classified as a separate species. Unlike Eastern Poison Ivy, Western Poison Ivy doesn't grow as a vine, and instead it is a small, woody shrub that usually only grows up to 3 feet (91 cm) high. Both the flowers and the berries are white. The leaves are divided into 3 leaflets. The leaflets are quite variable and may have smooth, toothed, or lobed edges. 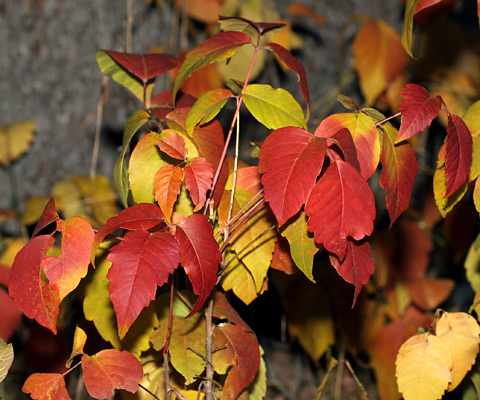 Toxicodendron species are found in many parts of the World, and they all contain varying amounts of urushiols, highly allergenic substances that can cause contact dermatitis (skin rashes) if the leaves are touched. Most, but not all people are allergic to urushiol, and only a small amount is needed to cause a reaction in those susceptible. It is also possible to be exposed to secondhand Poison Ivy by touching clothing or an animal that has brushed against one of these plants. Fortunately, urushiol can be washed off, and immediately washing exposed areas is the best way to help prevent or reduce a Poison Ivy rash. Urushiol is also present in the dead leaves, so these should be avoided as well.

I have never had a Poison Ivy rash, and I don't know if I'm lucky or just not susceptible. When he was in college, my dad was exposed to the smoke of burning Pacific Poison Oak (Toxicodendron diversilobum) when he helped fight a forest fire near St. Helena, California. Urushiol is present in the smoke of burning Toxicodendron species, and my dad ended up with a severe rash over most of his body from the horrible Poison Oak smoke.