On the evening of November 6, 2005, I observed a large, violet-blue meteor go shooting past headed southward in the southeastern Tucson, Arizona sky. I have never seen a violet shooting star before, and this one looked larger and brighter than any star or planet visible in the night sky. 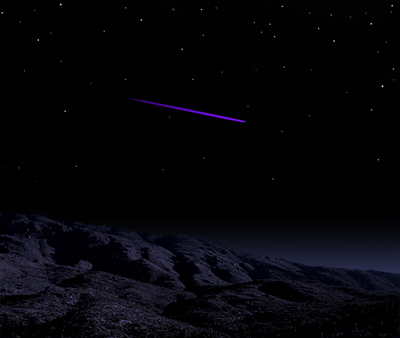 I created this artwork in Photoshop to show roughly what this violet shooting star looked like over the southern Rincon Mountains here in Tucson. I doubt that I will ever be lucky enough to get an actual photograph of one.

Meteors with visible light trails of ionized gases are commonly called shooting stars, and most will burn up in the atmosphere well before they reach the ground. If any of these sand to boulder-sized space rocks happen to reach the ground, they are then known as meteorites. When these rocks are still out in space and not within the Earth's atmosphere, they are called meteoroids. Much larger, and thus more dangerous space rocks are called asteroids.

This was not the only good-sized meteor I've seen here in Tucson. One night when driving home from a calculus night class, I saw a large, orange fireball fall to the ground somewhere near South Houghton Road well north of East Irvington Road. The fireball was trailing orange sparks and was breaking apart into good-sized flaming chunks. Given the fiery color and the fact that it was shattering as it fell, I'm guessing that it was made of stone. Fireballs like this that can be seen to visibly break apart are called bolides. I'm certain that this one hit the ground and became a meteorite, or more likely several meteorites. I drove around looking to see if it might have started a fire or something, but I was never able to find anything. It may have been much farther away than it appeared. I wonder if someone will ever find these meteorites.

Another night here in Tucson, I saw a large, glowing green ball of light fall somewhere over the Santa Catalina Mountains beyond Mount Bigelow. The glowing ball was huge but rather diffuse, and it appeared to be about 1/4 the size of the moon in the sky. The glowing ball was headed northward and disappeared behind the mountain peaks. I've never seen anything like it before, and I wonder if it was a glowing meteor or something human-created.