In October of 2005, while photographing the glorious fall foliage in the canyon along Bear Wallow Road in the Santa Catalina Mountains, my dad and I discovered a wild-growing Apple (Malus pumila, formerly Malus domestica) tree. 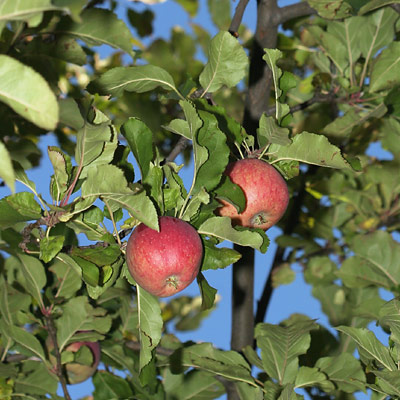 The apples were just ripening and were blushed with bright red. The delicious-looking fruits had attracted a small crowd of people. All of the apples were out of easy reach, so people were trying several different improvised methods to try to retrieve some of them. One man tried tossing a short stick tied to the end of a rope up into the tree, but he only had limited success. My dad used a big stick to knock one of the lower hanging apples out of the tree. One adventurous young man climbed up into the tree and gave the top branches a great shake, which caused quite a few apples to fall to the ground.

According to my dad, his apple was delicious, and you certainly can't get an apple any fresher than straight off of the tree. Too often, I've purchased apples in the supermarket that look nice on the outside, but turn out to be mushy and mealy on the inside from sitting around too long. I actually have a small apple tree in my yard, but the birds peck holes in the apples well before they even ripen, and then the Rock Squirrels (Spermophilus variegatus) steal the mutilated green fruits.

Humans, birds, and squirrels are not the only creatures that love apples, Black Bears (Ursus americanus) do as well. One of the surest ways to attract a bear is with ripe apples. Given that this mountain canyon is in prime bear habitat and has a large apple tree, a prominent sign warning of bears, and is along a road called "Bear Wallow", one can reasonably assume that there's a good chance of seeing a bear there. Luckily, during the peak fall foliage display, this canyon is filled with people and their dogs on the weekends, and so bears would probably stay away then. 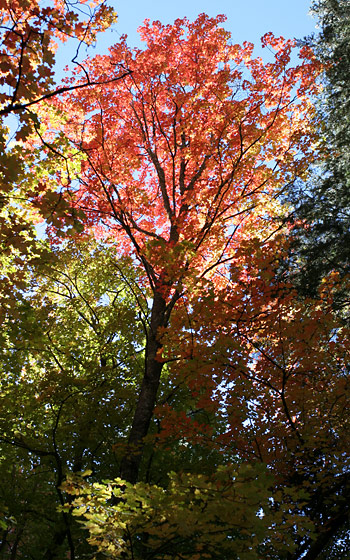 Despite the risk of bears, the glorious fall foliage of the Bigtooth Maples (Acer grandidentatum) and the challenge of picking delicious wild apples make this little canyon a great place to visit in October!