I often see wild animals when I'm out photographing wildflowers, and I'm happy to see them and hopefully get some photographs, but most of them are not at all happy to see me. This Rock Squirrel (Spermophilus variegatus) was a notable exception. 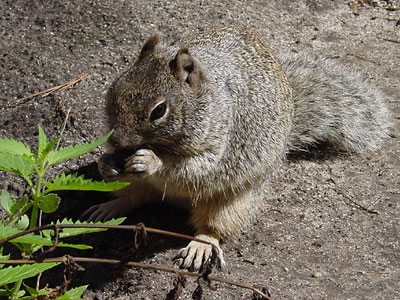 Last September, I was crouching down to photograph a flowering Pineland Figwort (Scrophularia parviflora) in Sabino Canyon when something gray and blurry filled the camera view. It was a Rock Squirrel standing on it's hind legs and grabbing for my camera. I stood up and the squirrel backed away. I cleaned the little, muddy paw prints off of my camera lens and crouched down again to get a nice, upward photograph of the figwort flowers against the sky, and the squirrel immediately came over and started climbing on me and grabbing for the camera again. I tried several times to crouch down and get a photo and each time the squirrel was all over me.

I was a distance above shuttle stop 8 in Sabino Canyon, but apparently this was one of that stop's infamous, tame Rock Squirrels. These squirrels will open zippers or chew through unattended backpacks looking for food. People feed them, so they become unnaturally bold and aggressive. The only way I could get my flower photos was to give the squirrel part of a granola bar that I'd brought with me. I gave the squirrel half the bar, thinking that would keep it busy for a while, but it ran off to hide it and was back almost immediately. I then broke off a few pieces from the remaining half and tossed them away from me and quickly crouched down to get some pictures. I had to repeat this process several times, but I eventually got my photographs and the happy squirrel got a whole granola bar as a reward for it's harassment.