I began seeing feral Common Pigeons, also known as Rock Doves or Rock Pigeons (Columba livia), at my bird feeders in 2005, and these birds are now daily visitors. I'm not exactly thrilled to have them at my bird feeders because not only are Common Pigeons large and greedy, they are also a non-native species and I don't want to help increase their numbers by feeding them. 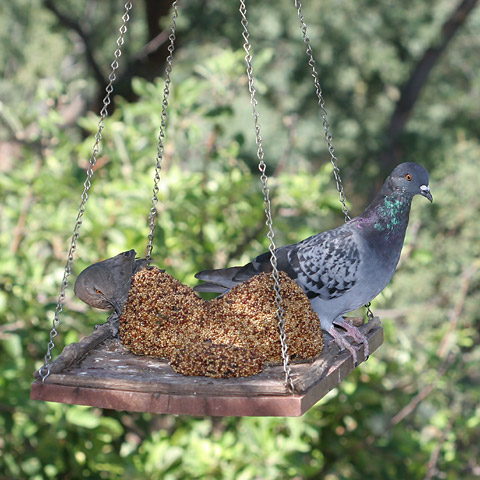 The sexes are similar, but wild-type male Common Pigeons have noticeably more iridescence on their neck. Wild-type Common Pigeons are blue-gray in color with two black bars on their wings. Domesticated pigeons with this wild-type coloration are called "Blue Bars". Because these pigeons have long been selectively bred in captivity, there are quite a few color variations among feral Common Pigeons and an even greater variation in the domesticated varieties. The above Common Pigeon appears to be a "Blue Checker", a variety distinguished by its distinctive checkered wings and blue-gray coloration.

Feral Common Pigeons generally prefer urban environments, and some nearby higher-density housing developments have undoubtedly brought them into my more rural neighborhood. Despite the abundant supply of these pigeons moving out from urban areas, I wonder how long each individual bird can survive in my yard because large, predatory birds are also frequent visitors here. A pair of Great Horned Owls are year-round residents, while winter brings an occasional Peregrine Falcon or Prairie Falcon as well as quite a few Cooper's Hawks. Many of the Cooper's Hawks that I see during the winter are brown and white immature birds like this one perched in a tree not far from my bird feeder. 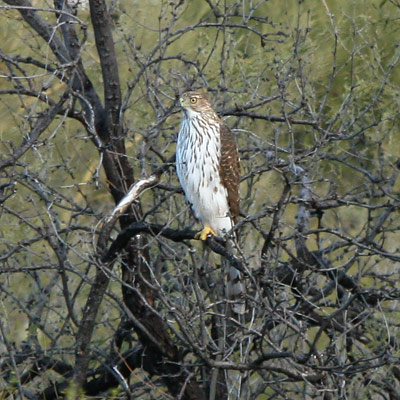 The Common Pigeons at my bird feeders don't seem to be very wary or overly concerned about potential predators or nearby humans. Some city pigeons can become so unconcerned that they will only halfheartedly flee from imminent danger.

I once saw a Common Pigeon refuse to leave the path of a moving car in a supermarket parking lot. The driver quickly lost patience as the unperturbed pigeon slowly meandered down the parking row, and the annoyed driver decided to drive forward regardless of the pigeon. Luckily for the pigeon, the car only ran over its tail feathers. The then tailless pigeon clumsily flew out from under the car and perched up on the supermarket's big, plastic sign. The pigeon seemed to be rather shocked at what had occurred and it kept ruffling it's feathers and turning it's head around to gaze in disbelief at its ugly, featherless rump. Maybe next time it will be a little more careful around cars!