Here in southeastern Arizona, Cooper's Hawks (Accipiter cooperii) are uncommon summer residents in the mountains and in riparian areas and fairly common transients and winter residents in all areas. I frequently see Cooper's Hawks in my Tucson, Arizona yard, where they like to bathe in the birdbaths and visit my bird feeders. Cooper's Hawks don't eat birdseed at my feeders, they eat other birds, and the large numbers of nice, plump, well-fed songbirds that a bird feeder attracts will in turn attract one of these deadly bird predators. 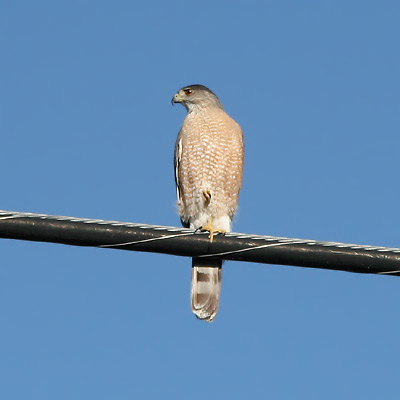 Cooper's Hawks and other Accipiter species have truly amazing flying ability. Their short, broad wings and long, narrow tails give them great speed and maneuverability when flying. Cooper's Hawks never soar overhead and circle about looking for prey. Instead, these rather sneaky hawks hide in dense trees or bushes and watch for birds out in the open. When they spot potential prey, Cooper's Hawks will fly low to the ground, hoping to surprise their unwary prey. If the bird takes flight, the Cooper's Hawk will then fly after it, and due to its superior flying ability and great speed, Cooper's Hawks are quite able to capture other, smaller birds in mid-flight. These acrobatic hawks will often fly right through trees or densely forested areas while chasing birds, deftly maneuvering at amazing, reckless-looking speeds over, under, and around tree trunks and branches. I once saw a Cooper's Hawk fly at top speed into a densely branched mesquite tree and emerge out the other side unharmed and clutching a bird.