Dirt roads crisscross the scenic northern foothills of the Santa Rita Mountains, and some of these dirt roads are not in the best condition after our recent, heavy, monsoon rains. On one dirt road, I came across this mud puddle which was so monstrously large that it was actually being used as a watering hole by a herd of range cattle. 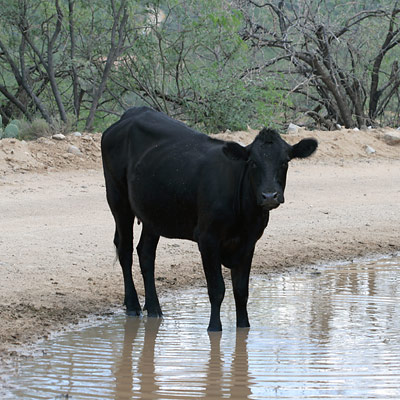 I was only able to get a couple of quick pictures from inside my car because Bounder, my Doberman mix, went into full, mad dog attack mode at the sight of all the cows. Not only was he shriek-barking hysterically in my ear, he was also frantically trying to climb over me to get out of my partially open car window. I was surprised at his reaction because he's seen cows many times before and has never reacted so violently. I think that he was upset at the large numbers of cows and their proximity. Some of the cows passed so close to the car that I could have reached out and touched them had I wanted to (which I really didn't).