That's what I said when I first saw this disgusting looking heap on the side of a hill here in Tucson. At first, I thought it was a pile of mouldering animal pelts, but when I got closer, I saw that despite its limp, dried seaweed-like appearance it was actually a dead prickly pear cactus (Opuntia species). 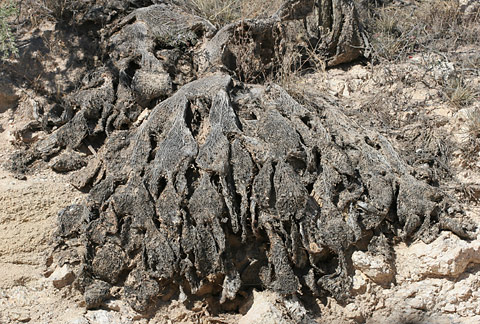 It's rare for a prickly pear cactus to flop over and die all of a sudden like this, and it may have been uprooted or suffered bacterial rot. Dying prickly pear cacti usually remain semi-upright, gradually turning yellow and curling up as they dry, with the pads eventually falling off and being carried away by Packrats (Neotoma albigula). Packrats eagerly seek out dead, dry, spiny prickly pear pads, and they will pile them on their large, messy nest piles to be used as spiny protection against predators. It looks like not even the Packrats wanted to touch this disgusting and strangely intact dead prickly pear cactus.