There is a large fire burning in the Santa Rita Mountains to the south of Tucson right now. The smoke from the fire is billowing toward the west, and it is lit by the setting sun in the photograph below. 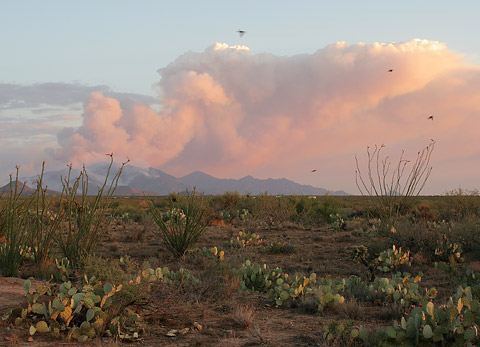 This fire has been named the Florida Fire. It started from a lightning strike during last Thursday's thunderstorms, and it has continued to grow since then. I don't know what the current burn total is, but firefighters are building fire lines in hopes of limiting it to no more than 18,000 acres total. The weather has been horribly hot (110 °F (43.3 °C) today) and dry since the fire started, which, along with the mountainous terrain, has made fighting it difficult.

The upper parts of large smoke columns like this can form pyrocumulus (fire cumulus) clouds, which can actually develop into thunderstorms. These fire-caused thunderstorms, with their often dry lightning, can set off more fires and pose an additional hazard to firefighters.

Update: The fire eventually burned up to the east side of the road to Madera Canyon, but the canyon itself was spared.