Some beetles are predators, with either the larva and/or the adults preying on other insects. A good place to capture insects is on the flowers they visit, which is where this black and orange Soldier Beetle managed to capture and kill a large wasp. 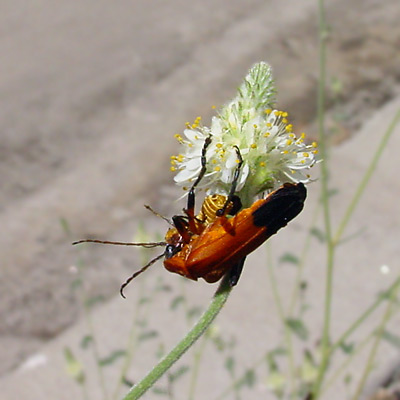 Wasps are not easy prey, and I was quite surprised to see this Soldier Beetle even attempt to capture one, much less succeed. Before long, the victorious beetle was contentedly munching away on its large, wasp meal. Soldier Beetles are members of the Cantharidae or Soldier Beetle family. Many of the beetles in this family have predatory larva and adults, and these beetles are considered beneficial because they help control (eat) insect pests.

How does a beetle kill a wasp? I'm not sure, but it looked like the beetle pinned the wasp down and then began eating its head.