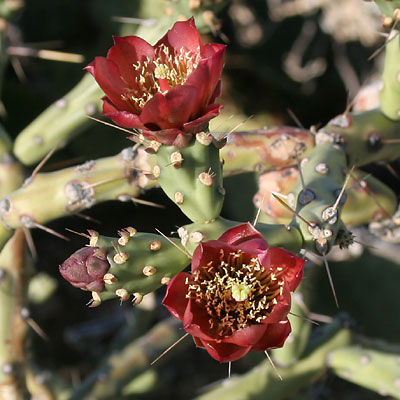 Curiously, I discovered that the Arizona Pencil Chollas in Saguaro National Park East (Rincon Mountain District) are generally red-flowered, while those in Saguaro National Park West (Tucson Mountain District) are generally yellow-green or bronze-flowered. Both populations bloom in May, although they are easy to overlook because each plant usually has only a few flowers blooming at one time.

Pencil chollas get their common name from their slender stems, but the stems are generally a bit thicker than a pencil, more like a woman's little finger in thickness or about 1/2 inch (1.3 cm) in diameter. 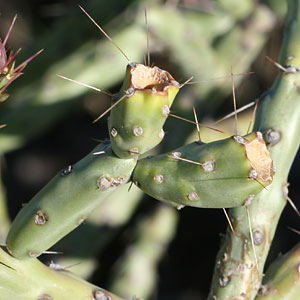 The fruits are green, and I don't know if they are edible like the fruits of some other Tucson cacti, but they certainly don't look too appetizing. Based on their appearance alone, they are probably tough and green-tasting, and eating them might be like eating the stems.