Mesquite trees, such as Velvet Mesquite (Prosopis velutina) which is abundant here in Tucson, can ooze significant amounts of sap if injured. Velvet mesquites ooze a dark, blackish brown sap which can stain patios or anything else under the trees. These deciduous, desert trees are attractive, fast growing, and don't require too much water, but they can be very messy over a patio, not only due to the dripping sap, but also because of leaf and bean pod drop. The photograph below shows thick, black, velvet mesquite sap splattered on plants growing beneath the tree. 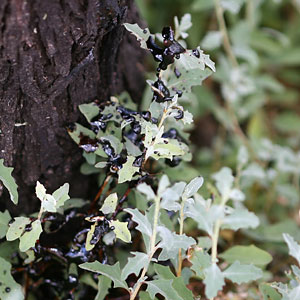 Despite being messy, Velvet Mesquite is a very nice tree for desert landscaping, and it is an important wildlife food source as well as having many other uses. Native Americans made a black dye and a sweet gum from this tree's dark sap. The flowers are a good food source for bees which make delicious mesquite honey from them. The bean pods are edible and can be ground into a sweet, nutritious flour or steeped to make a tea. Velvet mesquite wood is extremely aromatic when burned and it gives barbecued meat a distinctive flavor. This wood is so aromatic that simply burning it in a fireplace will make your house smell like a mesquite barbecue.