Arizona does not have the infamous Brown Recluse (Loxosceles reclusa) spider but it does have other closely related Loxosceles species collectively known as Arizona Brown Spiders which are also venomous. These spiders are often found in homes, and some of their favorite hiding places are in clothes or bedding.

Arizona Brown Spiders have toxic venom that can cause renal failure in very rare cases, and because the venom is necrotizing, it can eat away your flesh, causing ulceration and permanent scarring. These spiders are brown in color with a violin-shaped, dark marking on the cephalothorax with the neck of the violin pointing away from the head. They have 3 pairs of eyes, and their leg span is about 1 inch (2.54 cm). I found the Arizona Brown Spider below in my garage (it got away after being photographed). 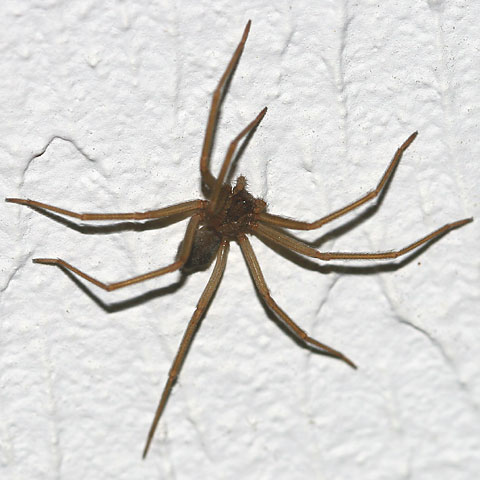 I love Tucson, but living in a more rural part of it like I do can occasionally be difficult for someone like me with arachnophobia. Arizona Brown Spiders, Black Widows, deadly Bark Scorpions, and Tarantulas are all quite common here as well as numerous other arachnids.