In April of 2005, I was thrilled to discover a lovely, blooming Palmer's Penstemon (Penstemon palmeri) in Molino Basin near Tucson. I excitedly stepped forward without looking at the ground (not a wise move here in rattlesnake country) in order to get a better close-up photograph of the flowers. Luckily, my more observant and less wildflower-obsessed father who was accompanying me on this photographic expedition, quickly told me to stop and not put my foot down. I looked down with my foot still in the air and discovered that I had almost put my foot into a very much occupied web of a Black Widow Spider (Latrodectus sp.). 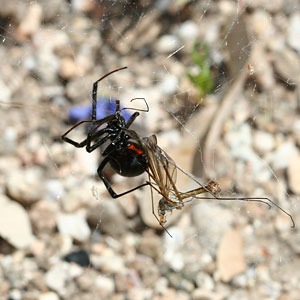 Female Black Widow Spiders have a venomous bite which can be quite painful or even very rarely life threatening. My dad was once bitten on the arm by one, and the area where he was bitten became very tender and swollen, and he felt quite sick from the effects of the bite for a while afterward.

Female Black Widow Spiders are black with a red to orange mark on their abdomen, usually in the shape of an hourglass. Their webs are easy to recognize because they are random and disordered in construction and usually found in dark, undisturbed hiding places. This Black Widow Spider had just crawled out of her hiding place under a rock to collect a doomed Crane Fly (Family Tipulidae) trapped in her web.