On warm summer evenings in the southwestern deserts, Lesser Nighthawks (Chordeiles acutipennis) can be seen just after sunset darting about hunting for nocturnal insects and gracefully skimming over swimming pools and other large water sources to scoop up mouthfuls of water and snap up any drowning insects. 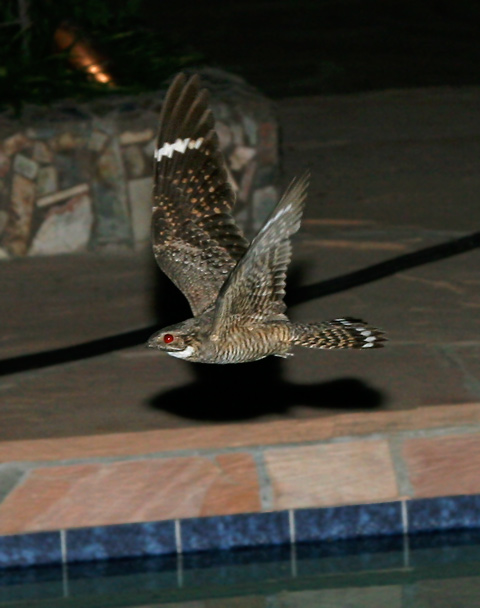 Lesser Nighthawks excel at capturing insects in flight and have huge, gaping, insect-scooping mouths edged with long, curved whiskers to help funnel in the insects. Lesser Nighthawks have relatively large eyes with a light reflecting tapetum lucidum layer to improve their vision in low light conditions and help them spot their nocturnal prey. Their eyes are normally dark-colored, but at night, light reflecting off the tapetum lucidum causes them to glow a sinister red.

Lesser Nighthawks look very similar to other nighthawk species and it's hard to get a good look at them when they are flying around, so one of the easiest ways to identify them is by their distinctive long, low, monotonous trilling calls.

Because Lesser Nighthawks nest on the bare ground and are so well camouflaged with their mottled plumage, it is possible to unintentionally stumble across one of their nests. One time I was walking my dog Chessie on a desert hill behind my Tucson house when we spotted an apparently injured Lesser Nighthawk. The poor bird was flapping and flailing around with what appeared to be a broken wing. This instantly activated Chessie's predatory instincts, and she took off after the bird with me in tow, but just before she reached it, the bird flew a short distance away and again began the now obviously phony broken wing act.

Some ground-nesting birds will pretend to be injured like this in order to lure predators away from their nests. It definitely worked on Chessie and she was completely fooled despite the bird's repeated flights. The bird led us to a safe distance away from its nest and then flew away. Chessie and I took a different path home, and we avoided that area until I was sure that the Lesser Nighthawks were done nesting. I never did see the actual nest because it was so well camouflaged.