Coachwhip (Masticophis flagellum, formerly Coluber flagellum) snakes are found in the southern half of the United States and throughout much of Mexico. Here in Arizona, these fast-moving, whiplike snakes are found in desert and grassy upland areas in the southern and western part of the state. I observed this black-colored Coachwhip below in my Tucson, Arizona yard. My dogs were the first ones to discover it, but luckily they were afraid and stayed away from it, so neither my dogs nor the snake was bitten. 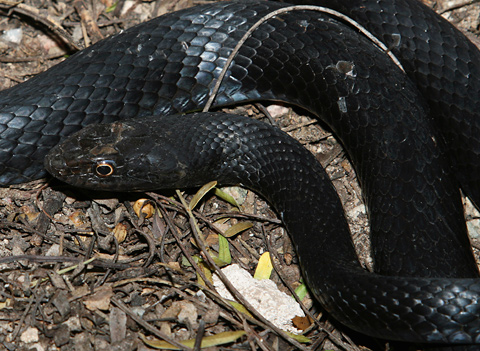 Coachwhips come in a wide variety of colors and may be mostly black or brown, tan, gray, rust, pink, or even bright red in color with lighter blotches or crossbars. I have seen black, brown, gray, and bright red ones in my yard, but this is the first one I've ever managed to photograph. Coachwhips are long and slender, up 5 feet 8 inches (1.7 m) long or more, and this whiplike shape and the braided leather whip pattern of their scales give them their common name. Their eyes are yellow with round pupils, and their daytime vision is excellent.

Coachwhips are both visual and scent hunters, and on even the hottest of summer days, they can be seen rapidly gliding along with their head held high and tongue flicking as they search for prey such as rodents, lizards, birds, eggs, insects, and even other snakes. If prey is spotted or sniffed out, a Coachwhip will race after it at amazing speed for a snake, up to 8 mph (13 km/h). Coachwhips are among the fastest North American snakes, and since average human walking speed is about 2 to 3 mph (3 to 5 km/h), you'd have to run to catch up to one of these fast-moving snakes. We once observed one of these snakes chasing down a speedy Greater Earless Lizard (Cophosaurus texanus), and if we hadn't accidentally frightened off the Coachwhip, it would have almost certainly managed to capture the poor lizard. 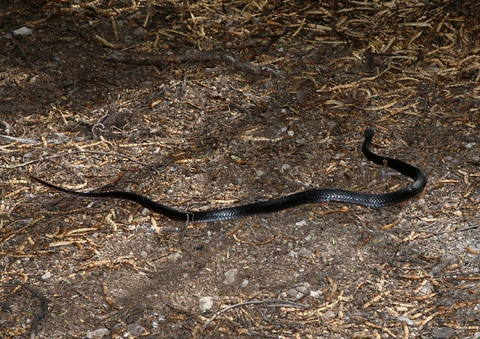 Coachwhips themselves are difficult to capture because not only are they very fast, they are also very wary, especially of humans. Although they are fairly common Sonoran Desert snakes, most sightings of Coachwhips here are only brief glimpses of a long, thin, fast-moving snake racing off to disappear into the grass or brush. Coachwhips are nervous, bad-tempered, highly active snakes, and they generally don't do well in captivity. If cornered, a Coachwhip will coil up defensively, and if approached too closely or if handled, it will become extremely hostile and will bite repeatedly, usually aiming at your face (if it's within range). Despite their common name and the colorful tales about them, Coachwhips only bite, they do not "whip" people. Fortunately, these snakes are non-venomous and will try to avoid humans. The only person I have heard of being bitten by one was a wildlife rescuer attempting to care for one.