House Wrens (Troglodytes aedon) are small, plain wrens found throughout most of the Americas in wooded thickets and in areas of dense, shrubby vegetation from southern Canada to the southern tip of South America. House Wrens are not only widespread, they are also quite common, and I have observed them in many places here in the United States and in Costa Rica. In June of 2008, we observed this House Wren below near the 9,157 foot (2791 m) summit of Mt. Lemmon in Arizona's Santa Catalina Mountains. Here in southeastern Arizona, House Wrens are common summer residents in mountain pine forests and fairly common winter residents in lowland brushy areas. 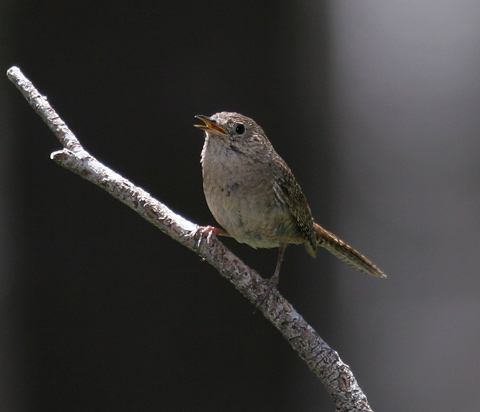 House Wrens favor low, dense cover, and with their small size and drab coloration, they would be difficult to spot if it were not for their constant activity and frequent dry chattering and scolding calls. We had apparently strayed too close to this one's nest, and the angry wren hopped from branch to branch in a nervous, agitated fashion and furiously scolded us. The House Wren's scolding diversion proved successful and we never did spot its well-hidden nest. Once we moved away, the relieved House Wren quieted down and disappeared into the bushes. 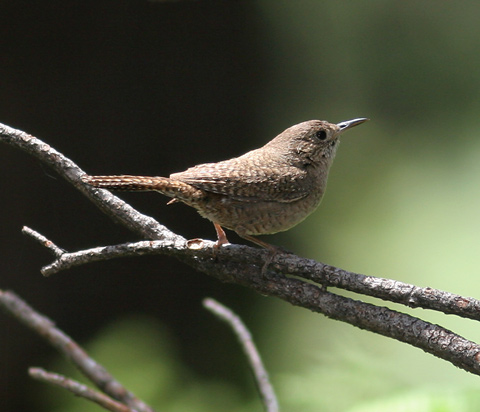 House Wrens are among the plainest of wrens due to their drab brown coloration and lack of distinct markings other than faint brown barring, a buff eye-ring, and an often indistinct light eye-line. This plainness distinguishes them from all other wrens here in the U.S. except for western Winter Wrens (Troglodytes troglodytes). However, Winter Wrens have only a short stub of a tail and are thus easy to distinguish from House Wrens.

As their common name indicates, House Wrens will nest in birdhouses, especially those designed for wrens. These eager little cavity nesters have even been known to puncture the eggs of other cavity nesting birds and usurp their nests. Despite this sometimes naughty behavior, House Wrens are quite beneficial to have around because they eat insect pests and will nest in disturbed, fragmented habitat like suburban backyards avoided by some other insectivorous birds.