Common Buttonbush or Button Willow (Cephalanthus occidentalis) is a small, native, deciduous tree or large shrub that grows along the edges of wetlands or in riparian areas. This attractive plant is also grown in native plant gardens, especially those near ponds and other moist areas. Even though it is an obligate wetland species (almost always occurring in wetlands), the moisture-loving Common Buttonbush can still be found growing here in the Sonoran Desert, usually in riparian areas like large desert washes and foothill canyons with streams. In September of 2007, I observed this blooming Common Buttonbush along the stream in lower Bear Canyon in Tucson, Arizona. 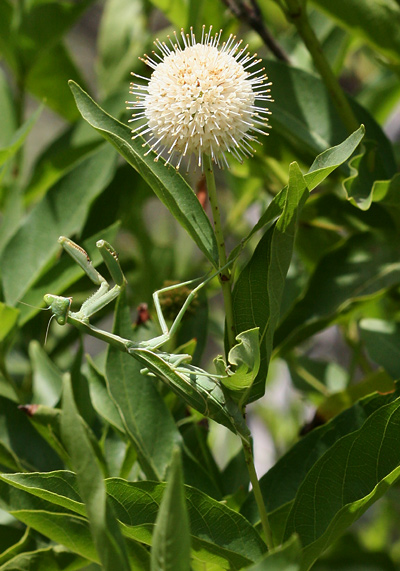 I wasn't the only one admiring the Common Buttonbush's orb-shaped flower clusters, I spotted this gravid (pregnant) female Praying Mantis in a worshipful pose beneath one of these white flower spheres. Praying Mantids (Order Mantodea) are deadly predators of other insects, so she was actually patiently waiting there to capture and kill any unfortunate butterfly, bee, or other insect attracted by the Common Buttonbush's flowers. Praying Mantids seem to know that flowers are insect magnets, so they are often seen lying in wait near them.

The white, 4-lobed flowers of Common Buttonbush may be small, but they are clustered into 1.3 inch (3.5 cm) wide, spherical flower clusters. The flowers each have a long, yellow-tipped style, giving the flower clusters a pincushion-like appearance. The leaves of Common Buttonbush are elliptical to lance-shaped and either paired opposite or in whorls of three. In other areas of North America, Common Buttonbush can grow up to 20 feet (6 m) tall, but here in Arizona, it is more shrubby and usually remains under 10 feet (3 m) tall.

Although the seeds are eaten by waterfowl and the bark has been used for some traditional medicinal purposes, Common Buttonbush is actually poisonous. It contains the poison cephalanthin, which can cause vomiting, convulsions, and paralysis if ingested. Along with the toxic cephalanthin, Common Buttonbush also contains cephaeline (cephalin), one of the active ingredients in Syrup of Ipecac (a vomit-inducing medicine), making this attractive, but poisonous plant even more inedible.