Gould's Wild Turkeys (Meleagris gallopavo mexicana) are a subspecies of Wild Turkey found in Arizona, New Mexico, and Northern Mexico. These large birds are currently rare, year-round residents in the mountains of southeastern Arizona, but they are locally more common in a few areas of prime turkey habitat (mature, open pine and oak forests with meadows or grassy riparian canyons) and in areas where they have been reintroduced. In April of 2007, I observed this female Gould's Wild Turkey and several others in Madera Canyon in Arizona's Santa Rita Mountains. 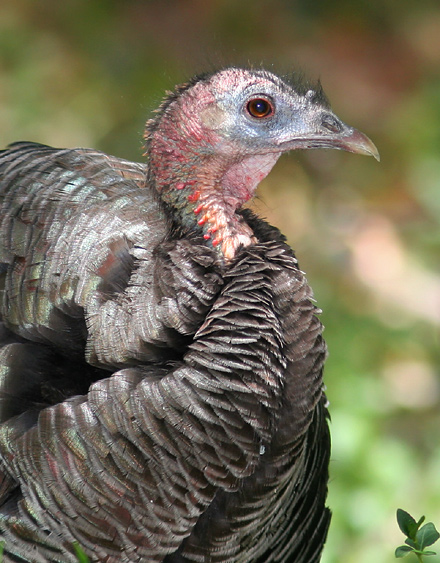 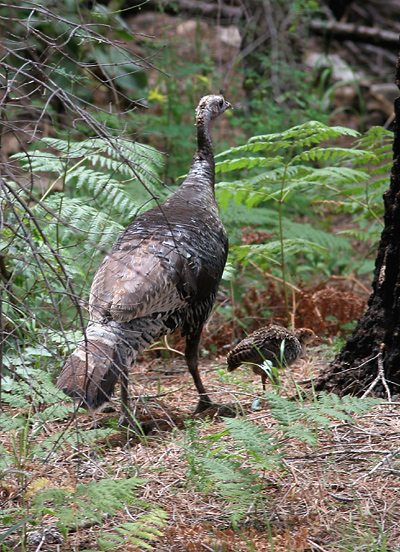 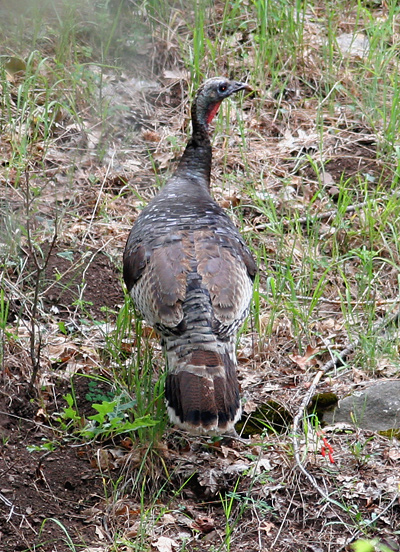 Unlike domesticated turkeys, which are generally white and very plump, Wild Turkeys are an iridescent dark brown to blackish color and noticeably more slender. Wild Turkeys have a mostly featherless, red and light blue head covered with strange, fleshy growths. Their head colors will become darker and more brilliant when they are excited. Males have red wattles on their throat and neck, a dangling tuft of feathers on their breast, and spurs on their legs.

During the day, Wild Turkeys forage on the ground for food such as seeds, acorns, fruit, tubers, bulbs, green plants (especially grass), and invertebrates like insects, snails, and spiders. Despite their size, Wild Turkeys can fly, and they will roost in trees at night, which helps keep them safe from predators like Coyotes.

Since humans (hunters) are also predators of Wild Turkeys, these popular game birds can be quite wary of humans, but in places where they are not hunted and humans are a familiar sight, Wild Turkeys can become surprisingly tame and tolerant of humans. The Gould's Wild Turkeys that I observed in Madera Canyon were very tame, while those in the Santa Catalina Mountains were much more wary of me, perhaps because they had young to protect.