Rufous-collared Sparrows (Zonotrichia capensis) are very common in suburban gardens, agricultural areas, and in any semi-open grassy area in the mountains and highlands of Costa Rica, generally above 2000 feet (610 m) in elevation. These common birds range from southern Mexico down to the southern tip of South America. Rufous-collared Sparrows are often found foraging out in the open around human habitations, and since they are quite tame and will allow you to approach them surprisingly closely, they are relatively easy to observe and photograph. 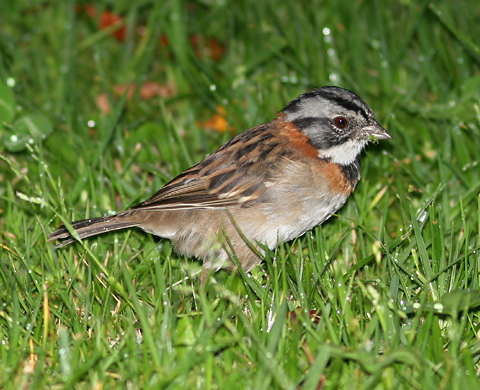 I observed a number of Rufous-collared Sparrows foraging for seeds and insects on the grass and lawns of San Gerardo de Dota, Costa Rica in May of 2007, and the only real challenge I had in photographing them was the near continuous cold rain and mist. San Gerardo de Dota is in the often mist-shrouded cloud forest at about 7000 feet (2134 m) in elevation in the Cordillera de Talamanca (Talamanca Mountains), and since the rainy season in Costa Rica begins in May, the rain here was really not a surprise. The Rufous-collared Sparrows didn't seem too bothered by the misting rain or by me bumbling nearby as I struggled to operate a heavy, complex camera with only one hand while holding a dripping, flimsy travel umbrella in the other. 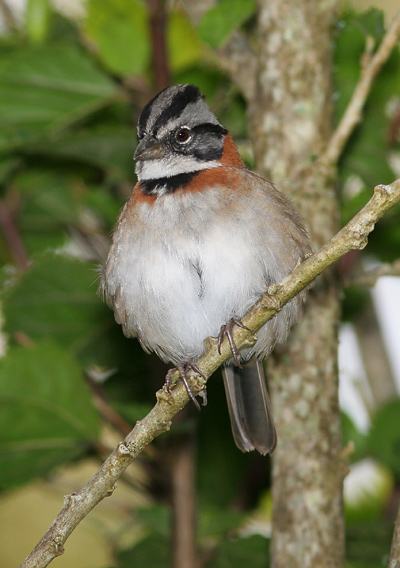 Late in the day or when the rain briefly grew too heavy, the Rufous-collared Sparrows would take shelter in dense shrubbery, where they would puff up their warm, insulating feathers and begin busily preening themselves.

Rufous-collared Sparrows are a streaked brown above and a dull, buff-edged white below, and they have a black-striped gray head, a broad, grayish bill, dark eyes, a white throat bordered by black and chestnut, and a distinctive rufous collar that is the most conspicuous when they bow their head. 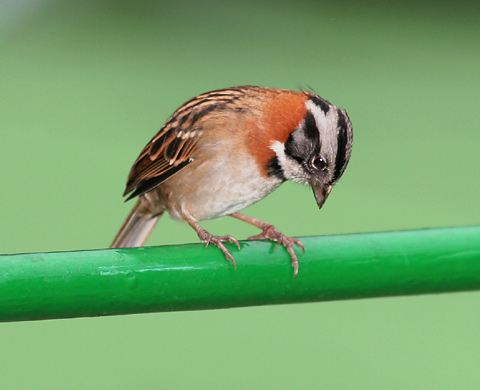 Unlike the more boldly colored adults that I observed, young Rufous-collared Sparrows have a dull buff and brown-striped head and lack the adult's distinctive rufous collar.