Barn Owls (Tyto alba) are fairly common, year-round residents here in Arizona, especially in farming areas. Barn Owls are not found at higher elevations, and they are not as often seen as some of our other more conspicuous Arizona owls. Amazingly, Barn Owls are found throughout the World in areas of suitable habitat on every continent except Antarctica.

Since Barn Owls are nocturnal hunters, they will sleep during the day, usually in a dense tree, a cliffside crevice, or in the upper part of a deserted building. This one was sleeping in a densely branched but leafless tree at Arizona's Whitewater Draw Wildlife Area in early March of 2007. 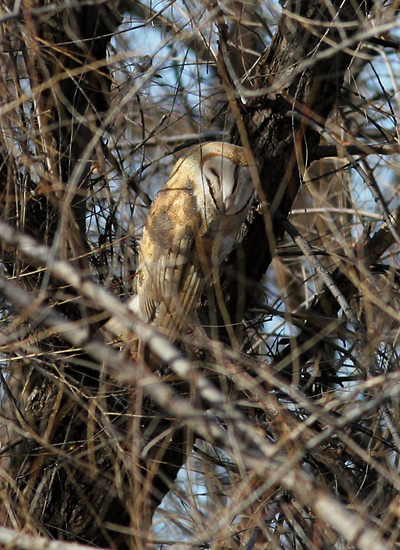 Despite its pale brown and white coloration, the motionless Barn Owl was surprisingly difficult to spot, but its distinctive white, heart-shaped face had too great a contrast with the dark tree trunk and gave away its presence. There is a large shed or barn-like structure at the Whitewater Draw, but the Barn Owl didn't want to go in there to sleep because a pair of larger, more aggressive Great Horned Owls (Bubo virginianus) were currently nesting in it, and they would not appreciate another predator near their nest.

Even though I rarely see Barn Owls unless I'm driving through an agricultural area at night (and even then it's usually just a brief, white glimpse of them flying past), I will occasionally hear their strange, unearthly, airy, hissing screech calls during the night. Barn Owls have probably the most terrifying call of any bird, especially if it comes unexpectedly at you out of the darkness, and given their fondness for haunting abandoned buildings and churchyards, pale-colored Barn Owls are the likely origins for more than one ghost story.