The 2006 summer monsoon rains here in Tucson were unusually heavy, and severe flooding wasn't the only result, there was also a noticeable increase in the numbers of our native amphibians. All the extra rain water left plenty of ponds and puddles behind for our desert frogs and toads to breed in.

Our desert toads are nocturnal, but they were so numerous toward the end of the monsoon season here in September of 2006 that I was also seeing them during the day as well. Some of the most common were Red-spotted Toads (Bufo punctatus) like this little one. 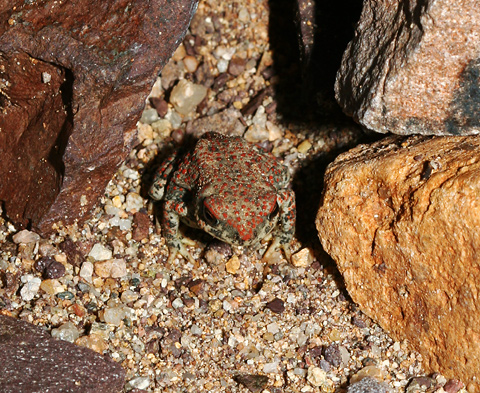 As I walked along our flowing desert streams at this time of year, every step would send a tiny, barely thumb-sized Red-spotted Toad hopping away over the sand and rocks. 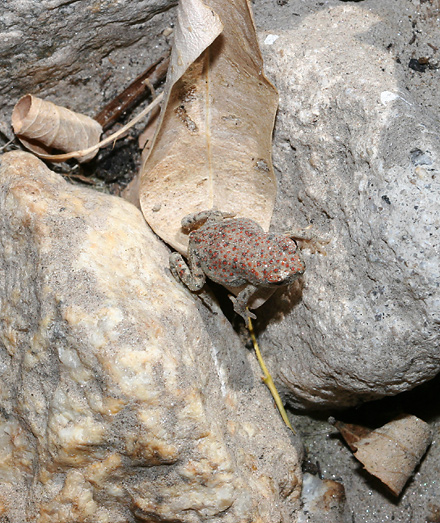 Red-spotted Toads are pale gray to brownish tan with numerous small red tubercles (wart-like bumps). They can reach up to 3 inches (7.6 cm) in length, but the ones in my photos were much smaller. Red-spotted Toads do have parotoid glands (which can be seen as bulges behind the eyes in the topmost photo), so these toads are poisonous, but Red-spotted Toads are so small that they really aren't as much of a concern with pets as are the huge Sonoran Desert Toads (Bufo alvarius).

During the summer monsoon breeding season, the males will call to attract females, a high-pitched, monotone trilling that is usually heard in the evenings after the rains.