For most of the year here in southern Arizona, Northern (Red-shafted) Flickers (Colaptes auratus cafer) are common in the pine-oak woodlands of our local mountains, but in the winter, they move to lower elevations where they will join Red-shafted Flickers that have migrated here from northern regions.

Variable numbers of Red-shafted Flickers are found here in Tucson each winter, and in this winter of 2006/2007, they are unusually numerous. I spotted this male Red-shafted Flicker and quite a few others in the trees around the golf course at Tucson Country Club on Christmas Day of 2006. 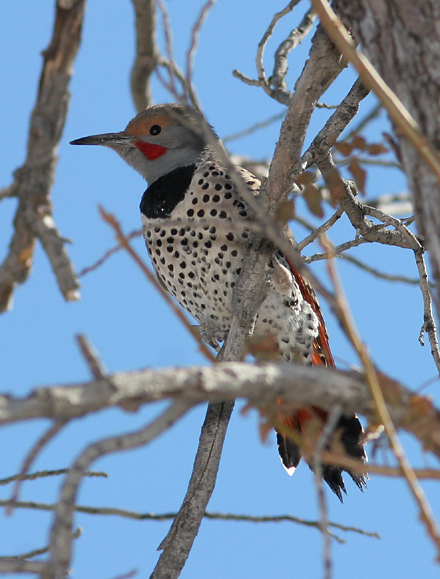 Red-shafted Flickers are a form of Northern Flicker (Colaptes auratus), but they used to be considered a separate species. They can easily be distinguished in flight from the Yellow-shafted form of Northern Flicker and the very similar Gilded Flicker (Colaptes chrysoides) by the red undersides of their tails and wings. The wing and tail feather shafts are red, which is why they are called Red-shafted Flickers.

Male Red-shafted Flickers have a red, teardrop-shaped mustache, while the females have a less distinct brown mustache. 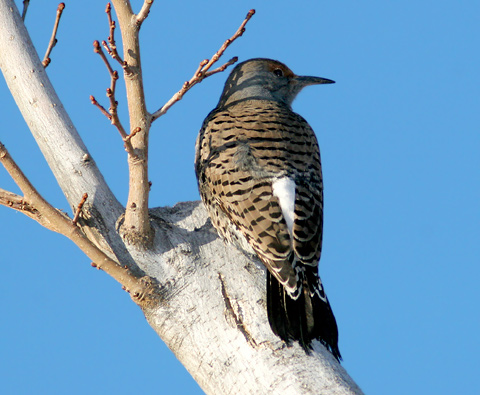 Like other Flickers, Red-shafted Flickers have brown backs and conspicuous white rumps. This and the red flash of their wings makes them very easy to identify even without binoculars. They also like to announce their presence with loud calls, so these birds really are hard to miss.