Vermilion Flycatchers (Pyrocephalus rubinus) are common in riparian areas here in southern Arizona in the spring and summer. They are normally uncommon here in the winter, so my dad and I were quite surprised to see dozens of Vermilion Flycatchers as we walked around the golf course edges at Tucson Country Club on Christmas Day. The bright red males were hard to miss as they darted out from low tree branches to catch insects over the grass.

Female and juvenile Vermilion Flycatchers are mostly brown with a wash of pale red underneath. 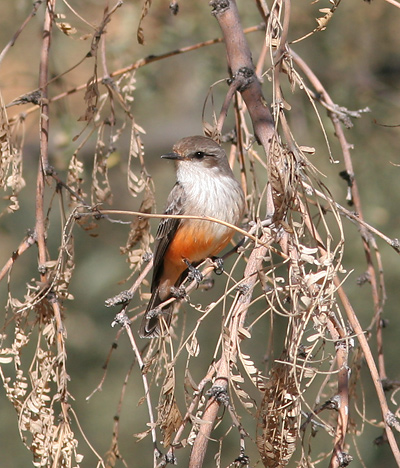 These small, cheerful flycatchers are fun to photograph because they fly-catch from low, open branches, pose nicely while perched watching for insect prey, and will often let you approach them fairly closely.