In late July of 2006, I observed this turquoise-blue male Clark's Spiny Lizard (Sceloporus clarkii) sunning himself on an alley wall here in Tucson. He only let me get a couple of quick photos before disappearing up and over the wall into someone's yard. 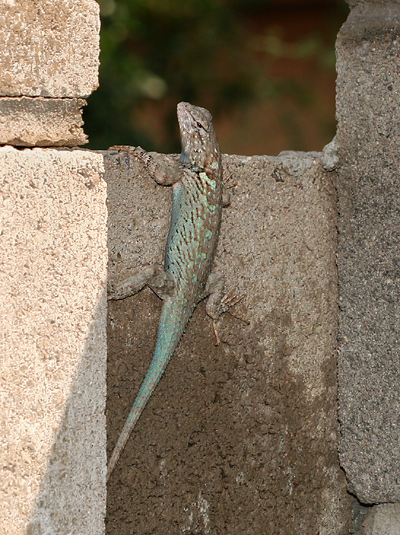 Clark's Spiny Lizards vary in color from gray to brown, but whatever their base coloration, they often have a blue tint to their scales. The males have a sapphire-blue throat (barely visible in the above photo). These medium to large lizards can be recognized by their large, overlapping, keeled, point-tipped scales, dark shoulder wedges, and by the dark bars on their forelimbs.

Clark's Spiny Lizards are climbers and are usually found off of the ground on rocks or trees (or on walls) in habitats ranging from Sonoran desertscrub to oak woodland. Clark's Spiny Lizards mainly feed on insects and spiders, but they will also occasionally eat leaves and flowers.