Some of the most artistically patterned beetles are the many different species of Calligrapha Beetle (Calligrapha spp.). These ornamental-looking beetles are similar in shape to a ladybug and have a dark metallic head and thorax and cream to old ivory-colored elytra (wing covers) with mirrored dark lines, spots, and/or swirls. Calligrapha Beetles are named for the calligraphic markings on their elytra, which can be quite ornate in some species.

I observed this dark copper and cream-colored Calligrapha Beetle below in the foothills of the Santa Rita Mountains near Tucson, Arizona in July of 2006. The wonderful pattern on its elytra looked strangely like a some sort of Rorschach inkblot test… What shape do you see in it? 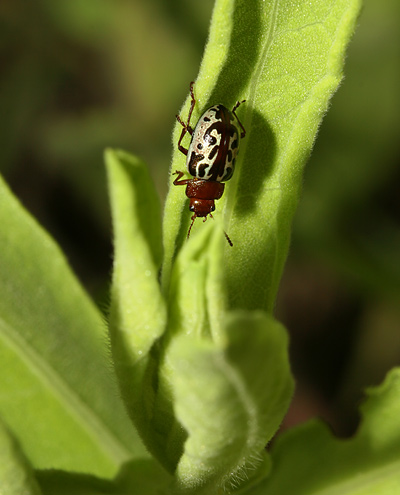